Chat with us, powered by LiveChat Andy Warhol in Fashion Land: Influences on and from the Apparel World - Revolver Gallery Skip to content

Home ▸ About Andy Warhol ▸ Andy Warhol in Fashion Land: Influences on and from the Apparel World 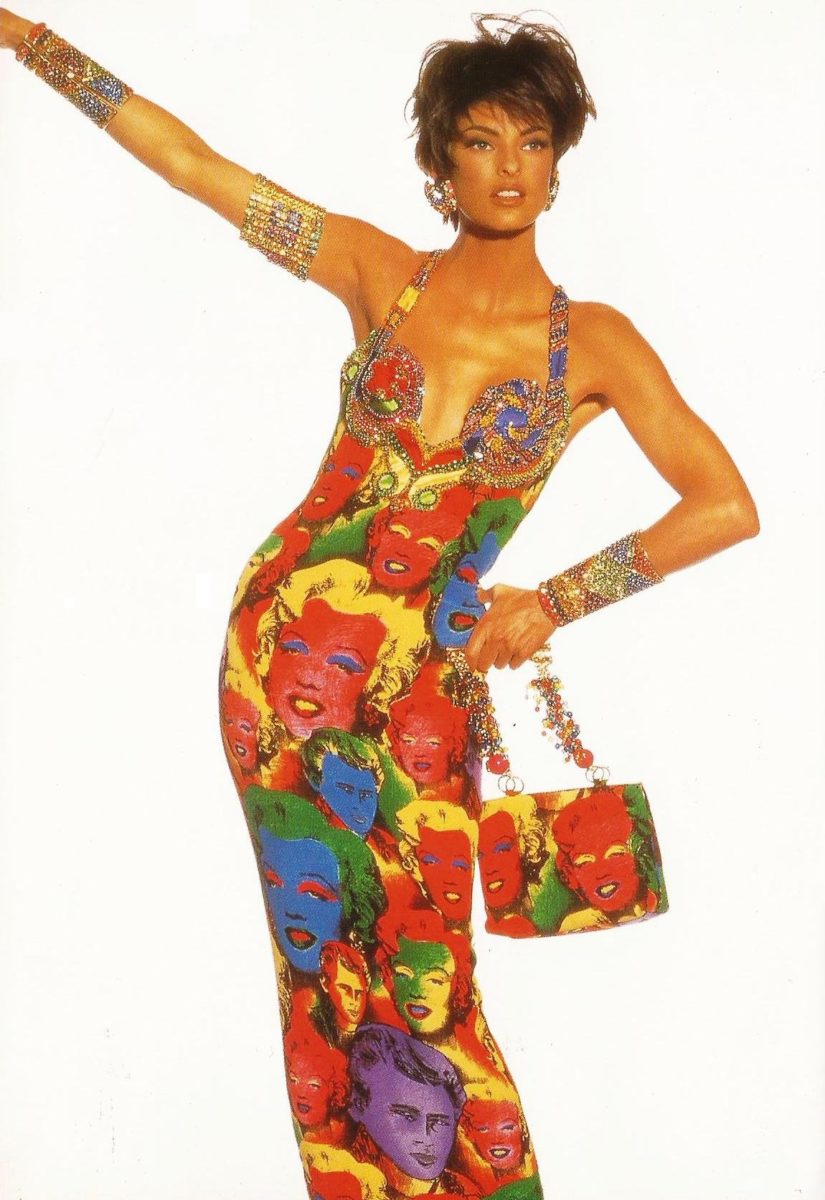 First, a statement of fact: Andy Warhol was an artist. One might wonder why such an uncontroversial and almost offensively obvious assertion would need to be mentioned. It’s needed to point out Warhol as a capital-A Artist, a creative who didn’t relegate his talents to only one domain. As such, Warhol tried his hand in several types of visual artistry, be it painting, sculpture, illustration, or often less discussed, fashion. In fact, it’s hard to overstate the indelible relationship between Andy Warhol and the fashion world, a scene he both influenced and was influenced by. Whether it was personal and creative relationships with high-profile fashion designers, designing his own accessories and articles of clothing, or his role in establishing the American fashion-advertising world of the 1950s and 60s, Warhol’s regard for fashion looms as large over his legacy as his reverence of celebrity. Celebrities needed to be clothed, after all, and clothed extravagantly.

Warhol knew something about extravagant clothing. Even from his earliest days as an artist, he expressed an interest in the intersection of business and fashion. In between semesters at the Carnegie Institute of Technology, where earned his BFA in Pictorial Design, Warhol worked at the Joseph Horne Department Store in downtown Pittsburgh. Philip Pearlstein, acclaimed realist painter and one of Warhol’s past classmates at CIT, asserts that Warhol deeply studied the fashion magazines the store carried and counts them as an influence. Warhol’s own responsibilities at Joseph Horne’s were to dress both mannequins and windows; he would employ the latter task in future jobs. By 1949, not long after Warhol’s graduation from CIT, he was doing substantial commercial advertising illustration work for high-profile clients. Winning over Glamour magazine’s then-artistic director, Tina Fredericks, with his blotted line technique, Warhol illustrated a number of articles for the fashion-for-the-young-working-woman publication, stating in 1949.

By 1955, Warhol was working as the sole illustrator for the I. Miller Shoe Company, a prestigious luxury shoe brand, with his ads showing up in the pages of the Sunday edition of the New York Times. Rather than using mere reproductions of their products, I. Miller relied on Warhol to sketch fanciful and whimsical versions of their prized shoes. It was winning strategy, as I. Miller wasn’t the only fashion accessory retailer to which Warhol lent his artistic graces. Around the same time, he produced similar illustrations for Palizzio, New York-based designers of exotic handbags and shoes. 1955 would also see Warhol bringing his window dressing experience from Joseph Horne to Bonwit Teller, another renowned department store with its flagship location on Fifth Avenue. Not constrained to just Warhol, the department store hosted several artists that made highbrow spectacles of their front windows including other Pop Art luminaries such as Robert Rauschenberg, Jasper Johns, and James Rosenquist. Warhol himself would have a notable display in 1961, containing his early comics- and newspaper-inspired paintings sitting alongside chic dresses offered by the store. 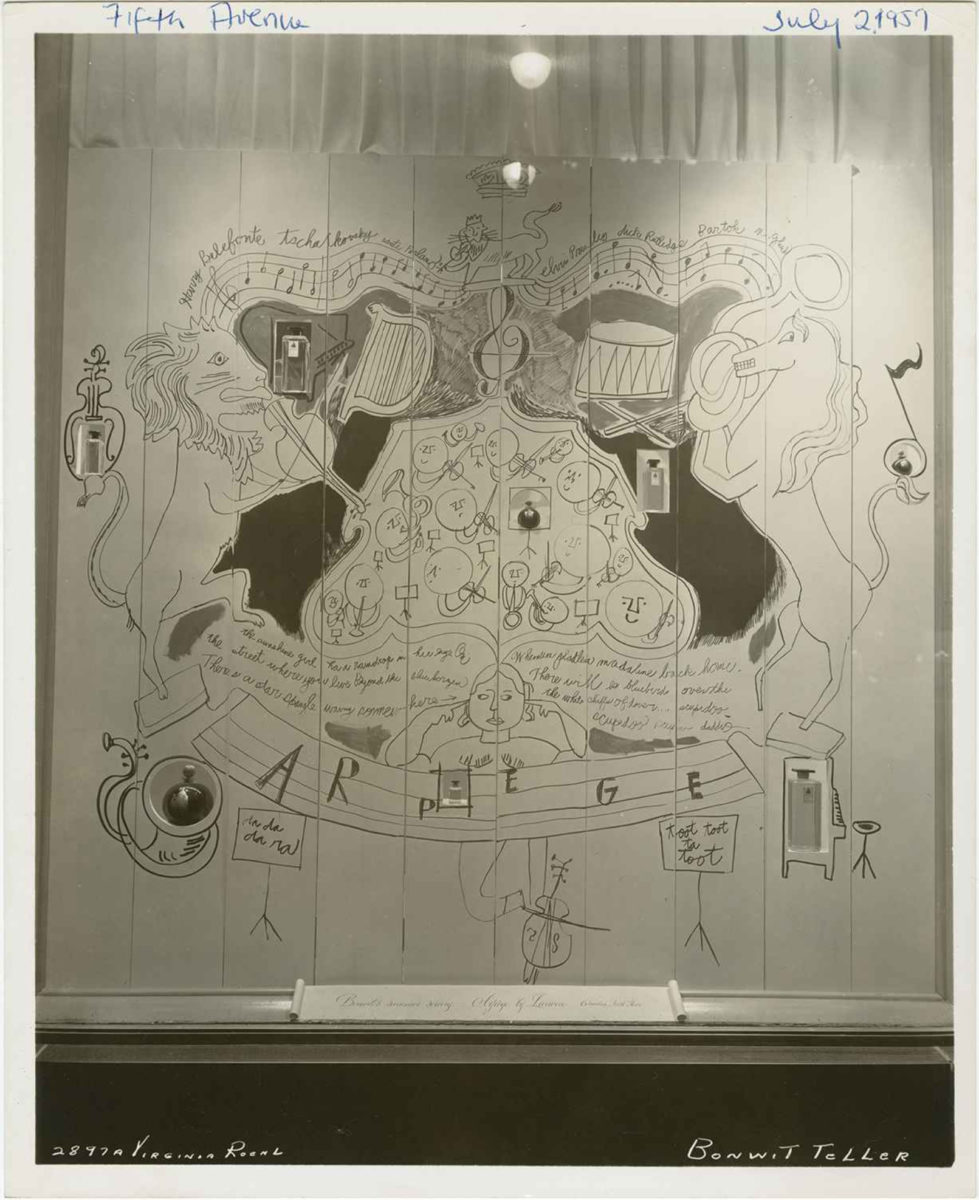 In 1966, Warhol was perhaps at the height of the first phase of his art stardom. He was by then rightfully regarded as a major player in the American Pop art movement, a movement that was critically recognized both domestically and abroad. Despite their chilly and sometimes initially mocked reception, Warhol’s Campbell’s Soup Cans, which debuted four years prior in 1962 at Ferus Gallery, had captured the public’s imagination. Advancements in textile technology allowed for the creation of inexpensive paper dresses, a novelty item that would wax and wane in popularity over the next decade, and Warhol was quick to capitalize on his Cans’ popularity. Using his constantly improving screen printing techniques, he produced a series of paper dresses covered in cans. These weren’t commercially available and seem to have been made solely for a select few New York socialites to wear to gallery openings. Even after his commercial advertising days were over, Warhol found a way to market a product; in this case, it was himself. 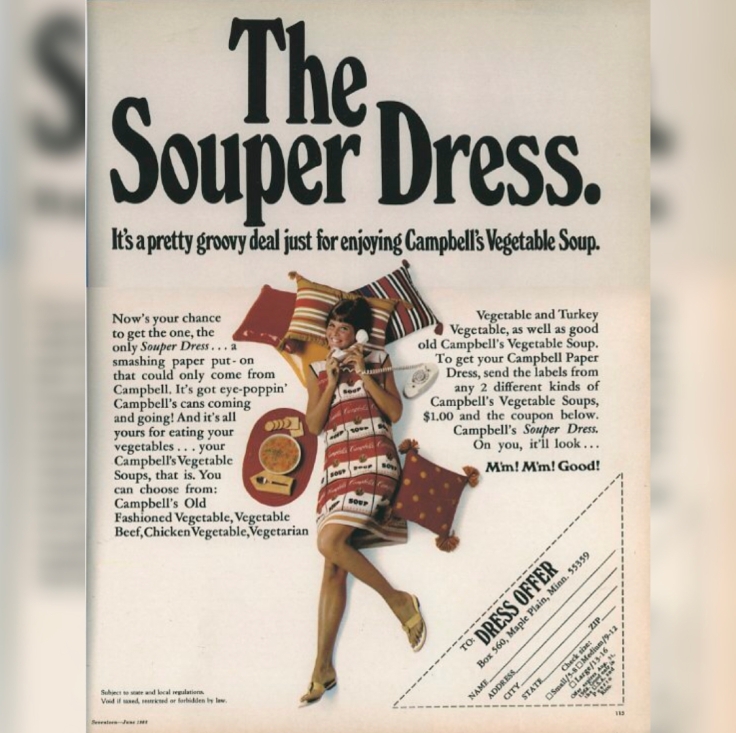 Campbell’s eventually produced its own version of Warhol’s dress, dubbing it the “Souper Dress”, offering it for two vegetable soup can labels, one dollar, and an indication of size. According to its label, it was an 80/20 blend of cellulose and cotton. Current listings for this $1 dress range from $5,500 to $25,000.

The Souper Dress proved to be a prescient indication of what was to come. Exercises in haute couture that have been influenced by Warhol’s contemplation of consumerism and reverence for the imagery of popular culture have abounded over the years. For starters, fashion designer Jean-Charles de Castelbajac unveiled a mass-produced goods themed collection for his Spring/Summer 1984 fashion line entitled Homage to the 20th Century, featuring, among other brands, a Campbell’s soup can dress. Similarly, designer Jeremy Scott channeled Warhol for runway shows in 2011 and 2014 for his eponymous label and Moschino, respectively, featuring clothes donning the iconography and color palette of brands like McDonald’s, Coca-Cola, and Superman. Even iconic brand Versace commenced a Pop-themed collection–one of their most notable and famous–in 1991, sporting attire characterized by nigh-garish, fluorescent and neon colors, and in one instance, mugshots of Marilyn Monroe and James Dean directly conjured from Warhol’s work.

The reciprocal influence of Warhol’s art and fashion on each other didn’t just happen at the level of production; it also played out in Warhol’s friendships and close associations with the hoi oligoi of the high-art fashion world. Perhaps most notably, Warhol had a working and partying relationship with Roy Halston Frowick, also known simply as Halston. Coincidentally enough, both had early ties to New York Department Store, Bergdorf Goodman, where Warhol made custom holiday postcards in the late 50s and Halston worked as a hat maker. They collaborated early on, with Warhol producing, along with creative director Joe Eula, Halston’s runway presentation at the 1972 Coty American Fashion Critics’ Awards. The presentation was rather unorthodox, featuring several Superstars as models cooking breakfast with exclusive General Electric appliances. The Halston-Warhol combo may be more known within the context of Studio 54, however, where the two became regulars along with mutual friends Liza Minnelli and Bianca Jagger. They would also regularly attend each other’s parties and eventually, Halston would rent Warhol’s beach house in Montauk, Long Island, where they would vacation together. 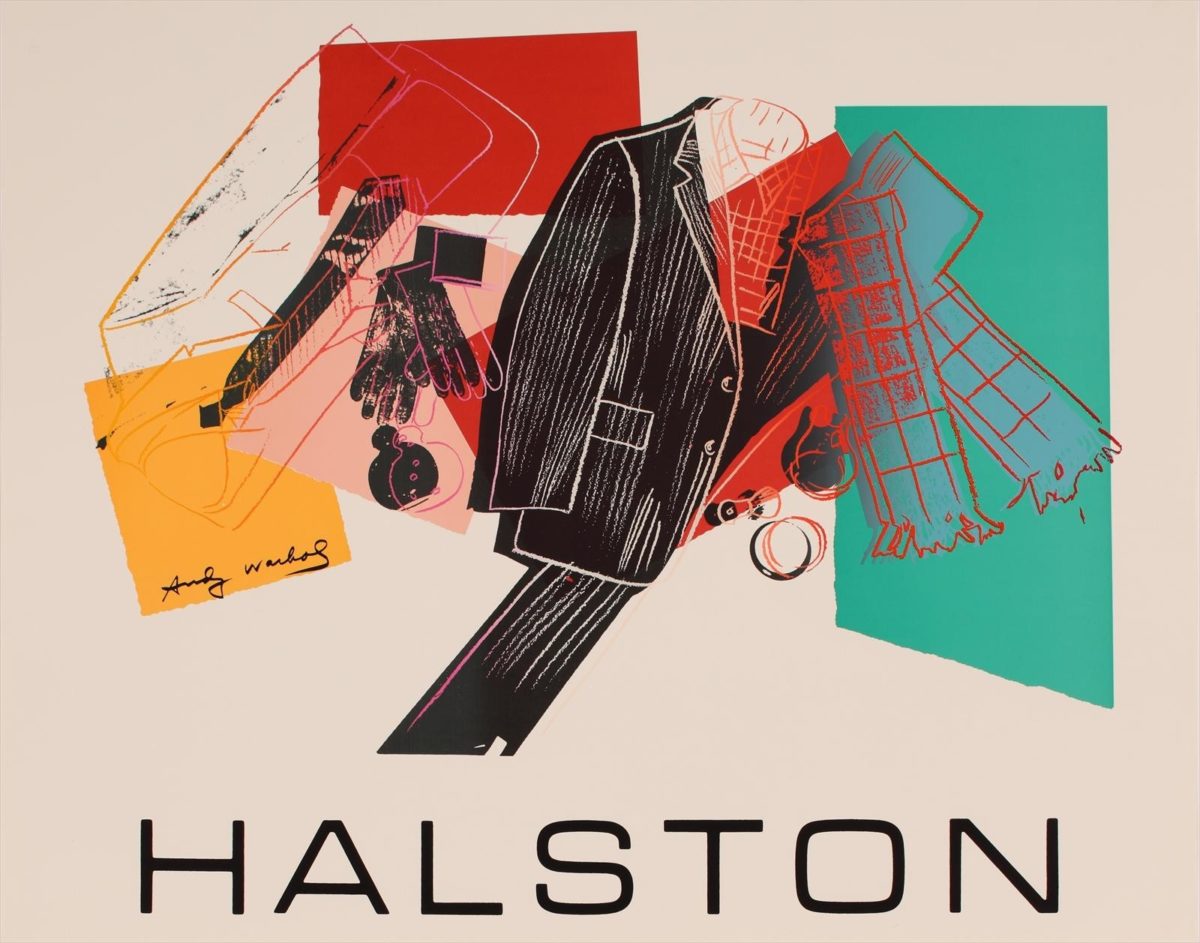 Warhol thought very highly of another fashion icon, Yves St. Laurent, going so far to comment that he was “the most important French artist.” The two met in 1968 in Paris where Warhol stayed for a pair of weeks while filming his movie, L’Amour (which incidentally included designer and creative director, Karl Lagerfeld, in its cast). Warhol would later immortalize Saint Laurent in one of his characteristic stylized portraits in 1972. Somehow, rumor had it that Saint Laurent detested the work. To diffuse any potential tension, he sent a letter to Warhol assuring him that this was not the case, partially reading, “I love them; I admire you; I am your friend.” In the year prior to his death, Warhol extended his portraiture work to Saint Laurent’s bulldog, Moujik.

Saint Laurent’s words about Warhol’s legacy corroborate what we established in the beginning of this article, and so, they seem like a good note to end on:

“He was a complete artist. Not just a painter, but an artist. His films, his posters, everything was about generosity. And madness. You certainly cannot be an artist without being a little bit crazy…”

PrevPreviousPresence and Absence: Andy Warhol’s Sexual Identity as Seen in His Body of Work
NextExploring the Andy Warhol IcebergNext