Chat with us, powered by LiveChat Exploring the Andy Warhol Iceberg - Revolver Gallery Skip to content 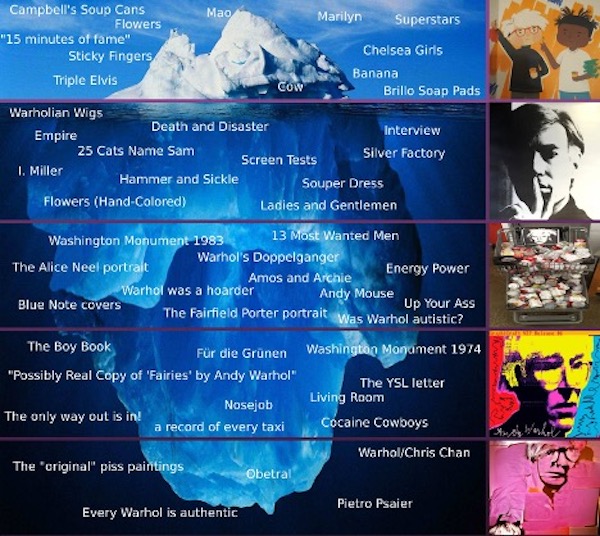 The internet is a strange place, and this is true regardless of whether you consider it a utopian Global Village a la Marshall McLuhan or a befuddling “series of tubes.” Part of this strangeness spawns from the democratic nature of the web, as now everyone has cheap, ready-to-hand editing tools and access to platforms that pool the collective cognition and creativity of millions. The internet is thus a manifestation of two adages by two very important 20thcentury artists, Andy Warhol and Joseph Beuys. The former predicted that “In the future everybody will be world famous for fifteen minutes”, now easily observed in the subsequent rises of reality television, social media platforms like Twitter and TikTok, and the amplifying power of news media (anyone remember Ken Bone?). The latter exclaimed that “everyone is an artist”, equally evident in the rise of meme and remix culture, the ascent of video sharing sites like YouTube, and imageboards like 4chan and Reddit. One fascinating recent-ish phenomenon is the “iceberg meme”. The meme takes the form of a photo of the entirety of an iceberg floating in a large body of water, incorporating the relatively small portion visible above the surface and the massive underlying remainder that constitutes the bulk of the icy mammoth. This image is divided into tiers, each representing the obscurity, notoriety, or difficulty of the items contained within. The deeper one travels along the iceberg, the more abstruse things become. Only those “in the know” would be privy to the works hiding in the darkest reaches of the depths.

With that said, what would an Andy Warhol iceberg look like? Luckily, the internet always delivers. Such an iceberg does exist. However, it’s clear that it’s not exhaustive; the Warhol rabbit-hole is incredibly deep. Still, it might be fun to try and decipher this product of collective imagination. 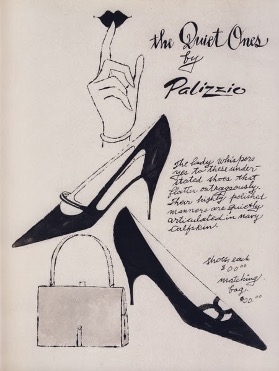 The first tier represents a clear distillation of the most publicly visible pieces of Warhol’s legacy, the pieces that have pervaded popular culture so completely that they readily come to mind to almost anyone. You might be hard-pressed to find someone who was unaware of the aforementioned “15 minutes of fame” line, the iconic Soup Can paintings (even if they’re used as an exemplar of everything wrong with “modern” art), or the cover of that one Velvet Underground or Rolling Stones album. Warhol’s Marilyn is no longer a series of paintings and prints but a general aesthetic that’s been used for advertisements and Snapchat filters. And even if they haven’t seen Chelsea Girls and are unfamiliar with Warhol’s Superstars, they might intuit the name Edie Sedgwick. Tier 1, like Warhol said of himself, is deeply superficial. 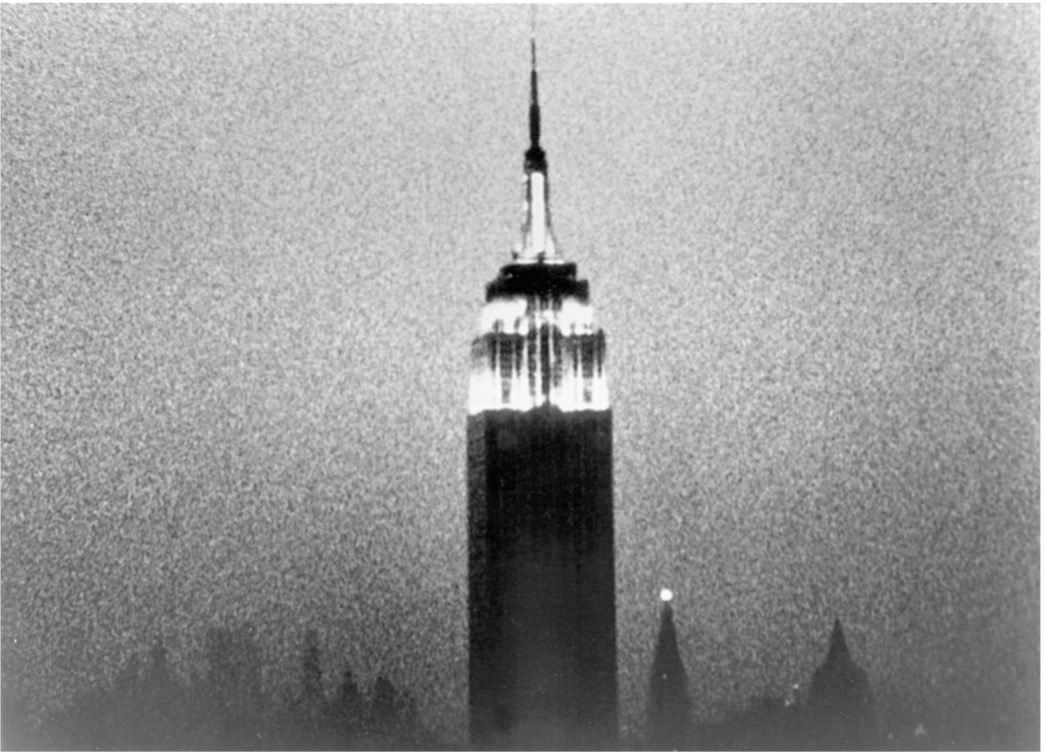 The second tier is less superficial, perhaps encapsulating the knowledge base of art students and enthusiasts. These are Warholian products just under the surface, both literally in the form of the image and metaphorically, in that they are still accessible but just less known. Though Warhol fans take such a thing for granted, many might be unaware that he was a successful commercial artist, illustrating ads for the I. Miller Shoe Company and NYC handbag and luxury shoe retailer, Palizzio, before making it as a fine artist. Similarly, many are likely ignorant of the limited run sketch collections and collaborations he published in the 1950s, such as 25 Cats Name Sam and One Blue Pussy, its name giving away its contents and featuring lettering from Julia Warhola, Warhol’s mom. Wacky factoids also abound. The Campbell’s Soup Company once sold paper dresses adorned in soup cans for just $1 and 2 soup can labels? Warhol filmed the top of the Empire State Building for over 8 hours? He also filmed people….just sitting there? His art studio was once covered almost entirely in tin foil? A random indie rock band wrote a cryptic song referencing his hairpieces? The mystique only intensifies as one descends. 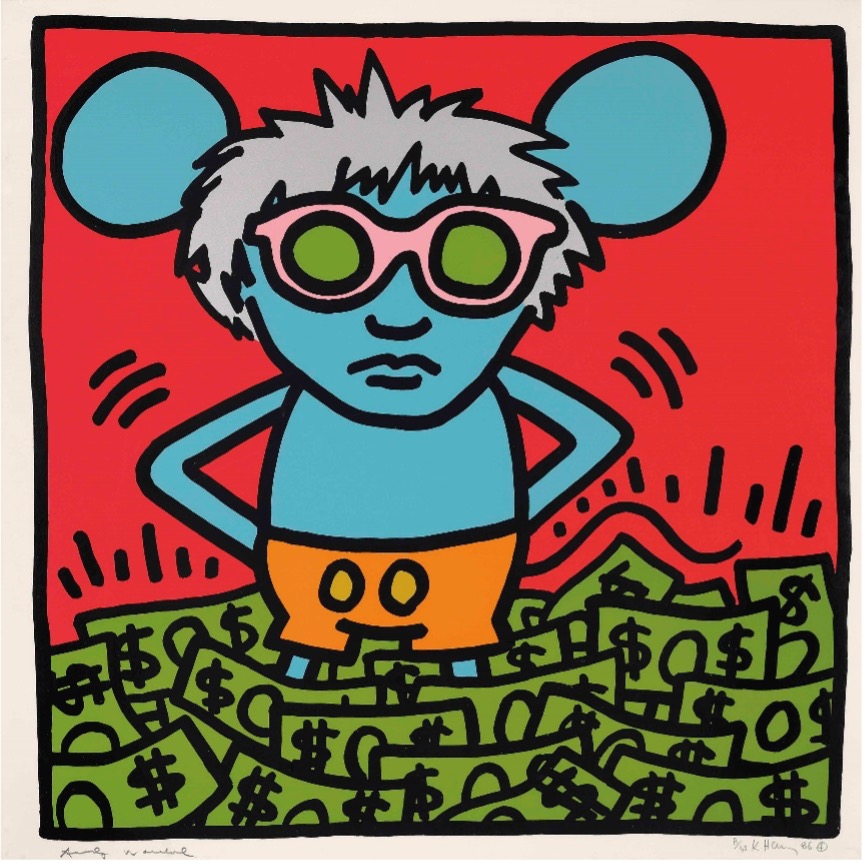 The third tier represents the middle point of our journey. From here, listed items are no longer almost solely comprised of Warhol’s artistic creations, but also increasingly niche events and phenomena concerning him. However, the former still remains. Take 13 Most Wanted Men for example. In 1964, Warhol created a huge 20 x 20 ft. mural for the World’s Fair in New York. As its name would suggest, it consisted of silkscreened mugshots of criminals wanted by the New York Police Department. However, reportedly due to dissatisfaction from NY’s Governor, the NYPD, and Warhol himself, the mural was covered in silver paint before the fair commenced.

Up Your Ass refers to a play written by Valerie Solanas, Andy Warhol’s would-be assassin. The radical anarcho-feminist is most well-known for her scathing diatribe against the male sex, named after the organization she formed in order to realize its aims, SCUM (the Society for Cutting Up Men). Solanas had established an unstable rapport with Warhol, starring in some of his films, and was convinced he would produce Up Your Ass. Warhol never delivered on his promise (if it indeed was a promise; reports deny it), and after a period of distancing himself from her, Solanas shot both him and art critic, Mario Amaya on June 3, 1968.

Andy Mouse was a creation of artist and friend of Warhol, Keith Haring. A depiction born of satire and friendship, the Mouse is a character bearing a striking similarity to some combination of Warhol and Mickey Mouse. The Mouse is shown either surrounded by money, wearing a dollar icon, or printed on actual currency. While gleefully parodying Haring’s friend’s preoccupation with money, the figure offers a subtle critique of the system that spawned it.

“Was Warhol autistic?” is a question that bloggers, medical professionals, and advocacy groups have been asking in the years following the artist’s death. They cite Warhol’s flat emotional affect, the focus on repetition in his art, his perceived social ineptitude, awkward and solitary nature, and his reported echolalia, a tendency of some with autism spectrum disorder (ASD) to repeat back the prior line in conversation. Warhol was, of course, never officially diagnosed, which puts the above in the realm of interesting speculation. Warhol’s brilliance has partially been attributed to his evasiveness and matter-of-fact demeanor in interviews and responses to critics. If those were manifestations of Asperger Syndrome, a condition falling under the autism spectrum, how might we reassess Warhol’s legacy? 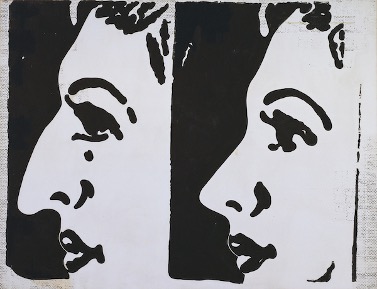 Für die Grünen is a reference to a 1980 poster Warhol made for the German Green Party at the request of controversial artist and political figure, Joseph Beuys. Around 500 prints were made and were among the most explicitly political pieces Warhol ever made.

Nosejob is a double entendre, meant to allude to an early painting, entitled Before and After, illustrating pre- and post-operative cosmetic surgery on a young woman’s nose, which in itself may have been a hint to Warhol’s own nosejob, a reportedly expensive procedure he had done sometime in the mid-1950s.

Cocaine Cowboys is a 1979 film by German actor and director, and Factory associate, Ulli Lommel. The film made extensive use of Warhol’s property in Montauk, Long Island and the artist had lengthy cameos throughout. The taping was allegedly surrounded by shenanigans catalyzed by star Tom Sullivan, involving drug dealing, police arrests, and extortion. 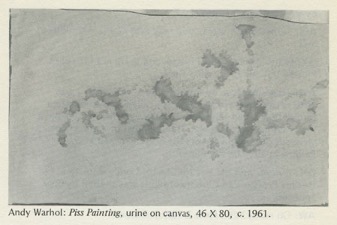 The deepest level. Seemingly a combination of obscurantism, speculation, and bizarre internet culture.

Warhol/Chris Chan is a book of art criticism by writer Dan Lashomb comparing the legacies of Andy Warhol and Christine Weston Chandler aka Chris Chan. Chris Chan is a notorious figure in certain circles of the web, having come to prominence in a back-and-forth trolling relationship with members of the Something Awful and 4chan forums, after devising a Sonic the Hedgehog-inspired comic series named Sonichu. In Lashomb’s view, Warhol and Chris Chan are semi-parallels: oftentimes ridiculed artists with distinct looks and personalities who transgressed typical gender norms, and built a mythos around themselves and the implicit spiritual inspirations of their art – both also produced their versions of The Last Supper.

The “original” piss paintings may refer to series of abstract works made by Warhol as early as 1961. While many are familiar with the Piss Paintings, in which urine was applied to treated canvas, from around 1977, Warhol admitted in an interview the year prior to having made prototypes much earlier. While an image of one of those works was reproduced in the magazine (see above) in which Warhol gave his interview, they remain unpublished.

The meaning of “Every Warhol is authentic” is vague. It could be a reference to Every Copy of Mario 64 is Personalized, a meme (facetiously) suggesting that every copy of the video game Super Mario 64 holds a particular, personally tailored horror for each individual player. It could also be a comment on the tension inherent in Warhol’s oeuvre, as some have expressed confusion telling the difference between a work genuinely produced by the artist, who himself used an assembly line of assistants and developed a style that increasingly removed traces of his involvement in it, and false productions. If every Warhol is authentic, would we need to do with the category of “Warhol”?

Even in its non-comprehensive state, the Warhol iceberg is impossible to cover in such a short essay. Andy Warhol’s life was replete with too many topics of interest, both well-known and somewhat hidden. In a great irony, this meme, which exists because of great technological advancement, humanizes Warhol, who himself strove to be more machine-like. Additionally, it exemplifies one of the strongest aspects of Warhol’s art; it lacks the markings of the individual artist. Is this a continuation of Warhol’s melding of the technical and the artistic? Only time

PrevPreviousAndy Warhol in Fashion Land: Influences on and from the Apparel World