Chat with us, powered by LiveChat Mourning the Loss of David McCabe: Andy Warhol’s Confidant and Personal Photographer - Revolver Gallery Skip to content 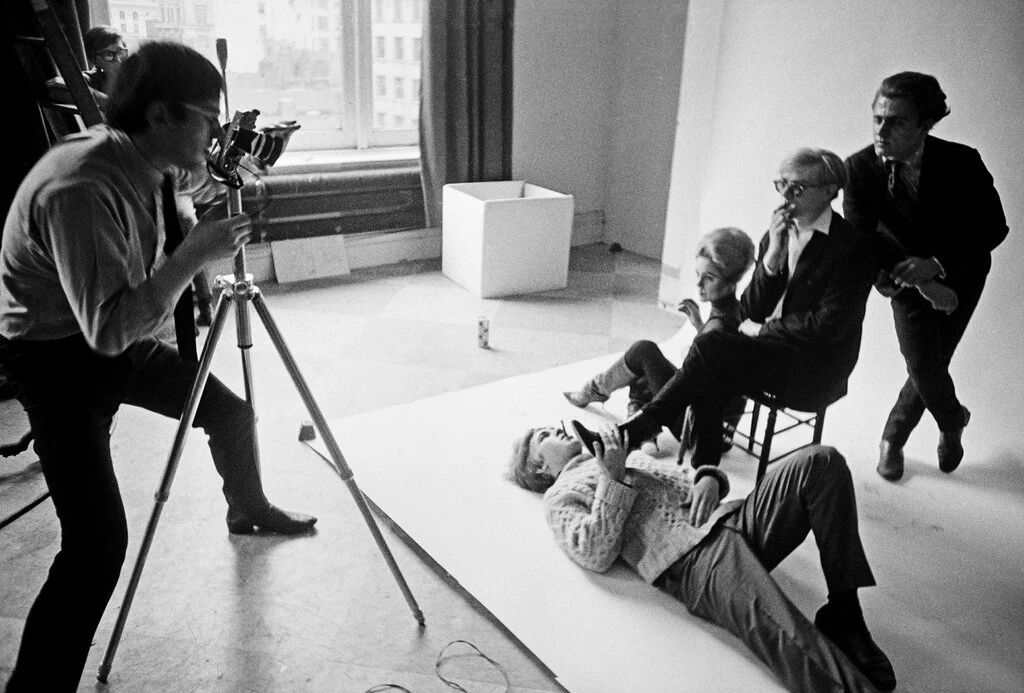 David McCabe, legendary celebrity photographer, died on Feb. 26th, 2021 at a hospital in Albany, N.Y. from lung cancer. He was 80 years old. Revolver Gallery and the art community are mourning the loss of McCabe, who Warhol hired to be his personal photographer in 1964. McCabe famously caught intimate glimpses of Warhol’s personal and professional life as the artist towered over the social scene of New York in the sixties. We have him to thank for many of the iconic images portraying Warhol and his entourage in 1964. 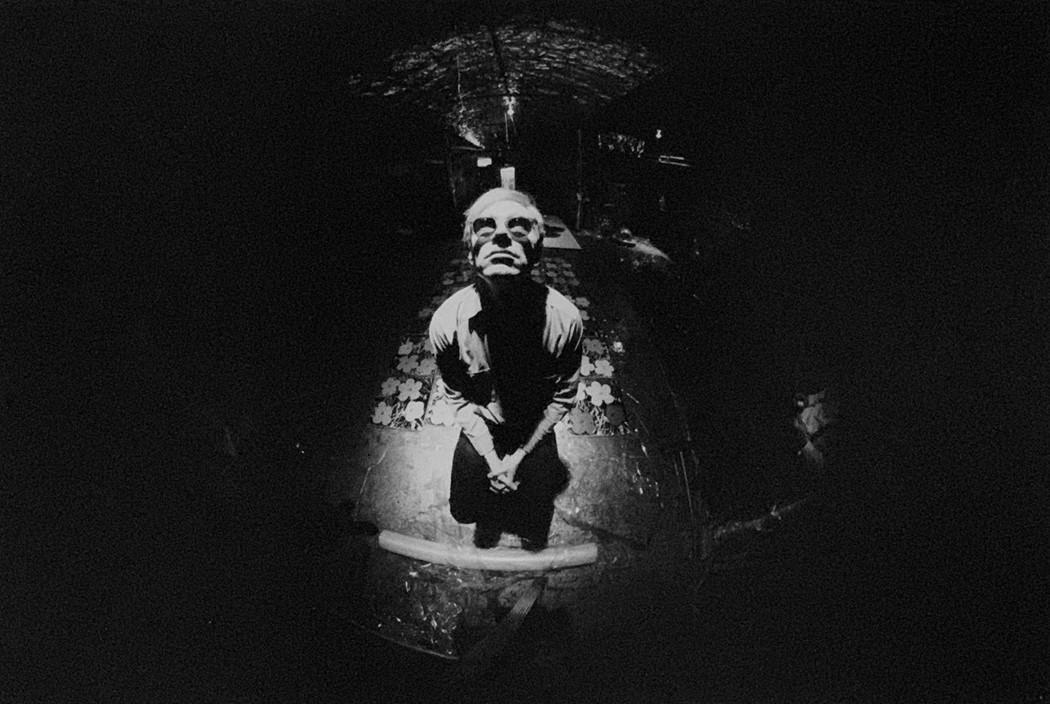 McCabe was born in 1940 in Leicester, England, where he eventually went on to study graphic design and photography at the Leicester Colleges of Art and Technology. In 1960, he moved to New York City where he studied under the well known photographers Alexey Brodovich, Henry Wolf, and Melvin Sokolsky. In 1964, McCabe was contacted by Andy Warhol, who was interested in hiring him as his own personal photographer.

Warhol invited McCabe to meet with him at The Factory on East 47th Street, where the artist interviewed his soon-to-be personal documentarian. Warhol was looking for someone to follow him around for a year and document his life, capturing the glamorous and exciting existence of Andy Warhol in action. After meeting with multiple photographers, Warhol chose McCabe, due to his unique style of photography.

Reminiscing on his first day on the job with Warhol, McCabe said in an interview with Dazed , “He reminded me of an alien, so I photographed him with a lens that made him look like oneit distorted his head. While I developed the photographs, I almost didn’t want to show them to him. I’d use a fish-eye lens—a lens not really used to photograph people—so I thought they were very unflattering photographs. But he loved them! He then asked me, ‘Would you be available if I call you and we go to various gallery openings and parties?’ I was like, ‘Sure! Sounds interesting to me.’ That’s how it started out. I got one hell of a ride for a year, for a 24-year-old Brit.”

McCabe and Warhol began their collaboration towards the beginning of the artist’s career. Prior to their meeting, McCabe was completely unaware of Warhol and his art. In a 2011 interview with The Arts Desk website, McCabe said, “I didn’t even know who Andy Warhol was. At that time he had a certain notoriety in Manhattan, but he wasn’t famous in the way he would later become. All that changed in the year I spent photographing him.” McCabe’s captivating black and white images provide insight into the artist’s inner life, as well as the thrilling activity of the New York social scene.

Not wanting to make it obvious he was being photographed, Warhol had some requests of McCabe when working. In an interview with Dazed, McCabe said that “the only stipulation Andy had of me was, ‘Please don’t use the flash.’ He didn’t want it to be obvious that he had his own photographer.” McCabe worked diligently and discreetly to ensure he would capture candid and raw photographs of Warhol and other regular Factory visitors. 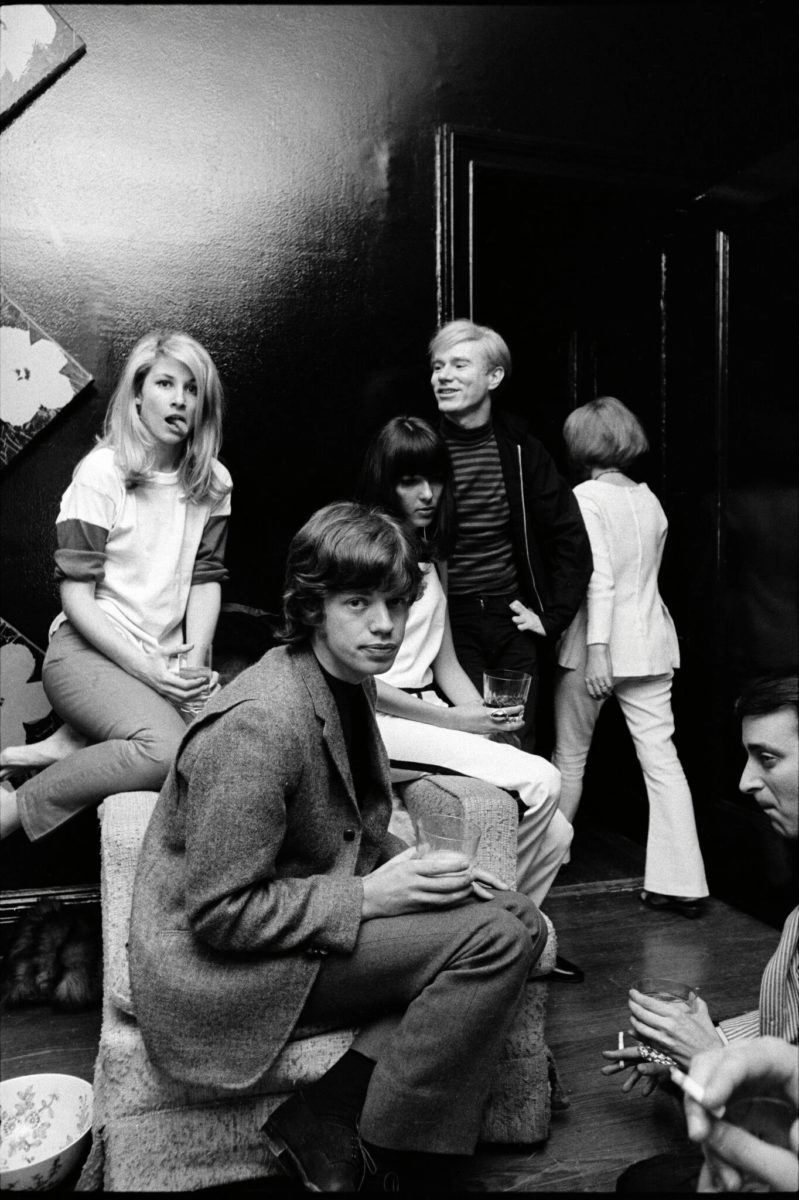 The relationship between McCabe and Warhol was very professional, with David taking the role quite seriously. McCabe once said, “I wasn’t intimidated by him at all. I got things out of him that people who were intimidated by him wouldn’t have got. Plus, he trusted me.” The collaboration between McCabe and Warhol was very successful, partly because of the comfortability they shared with each other

McCabe told Dazed, “He collaborated but he didn’t direct or try to control me. He just trusted me. We would be in places like the Museum of Modern Art, and he would be talkin to Richard Avedon, and I’d be looking around, milling in with the crowd. Andy would look up, give me the look, and I would shoot as I walked past. People would have no idea that they had been photographed by me. That’s the way we communicated, it was a non-verbal understanding of the situation.”

In the same interview McCabe explained, “I’m a sharpshooter, so I would get my camera set, ready with the right exposure, keep it hidden behind my leg, then whip it out, and take a shot before anybody even realised that they were being photographed. Quite often after whatever the situation was, Andy would come over and say, ‘Did you get any shots?’ He had no idea how I managed to do it without anyone realising.”

McCabe’s role as Warhol’s personal photographer ended in 1965, right at the launch of the Pop artist’s professional career. Although this collaboration resulted in hundreds of black and white images of the artist and his social life, Warhol did not use the photographs he commissioned.

“When he first saw them he found them perhaps too revealing,” McCabe told The Arts Desk. “A friend of mine who worked for him said he would spend

hours poring over the contact sheets with a magnifying glass – not to choose an image, but to study the way he was presenting himself to the world.” These images captured an intimate side of Warhol’s personal life, unlike the shy persona he typically presented to the public.

Although they only worked together for a year, McCabe had explained the evolution of Warhol’s persona during their time together. “At the beginning of the year he was very smiley and open, very normal. By the end, he had his sunglasses on—he’d adopted this mysterious, noncommunicative persona.” McCabe watched as Warhol’s behavior changed, and he captured this evolution on film. 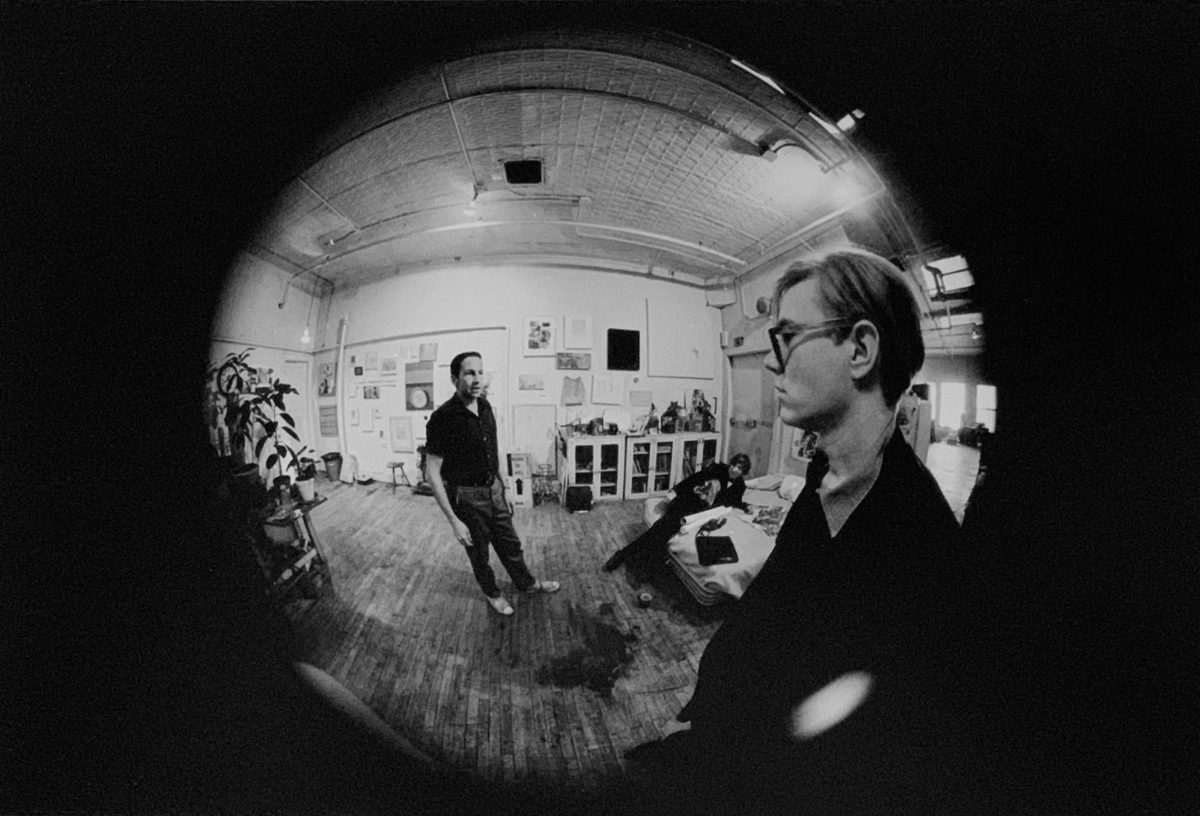 Although in 1965 Warhol tried to publish a book of McCabe’s photographs, he was not yet famous enough to make it happen. During this time, Warhol received criticism (and praise) for his Campbell’s Soup Cans and his early Marylin images.

For years, neither McCabe nor Warhol did anything with the photographs; that was, until the publication of “A Year in the Life of Andy Warhol” in 2003. McCabe kept these images stashed in a file cabinet in his studio, disregarding them for nearly 40 years.

Circa the year 2000, John Smith, then curator at the Warhol Museum, became aware of the never-before-seen photographs’ existence. Smith contacted McCabe about the photographs and they met to look over his work. McCabe told Dazed, “He spent all day looking through my contact sheets, and he said, ‘Thank God you’ve got these photographs of him doing the silkscreens and the flowers. We had no idea these existed!’ He bought like 50 of my images for the museum.”

McCabe’s images unveiled a side of Warhol that his fans had not yet had the privilege of glimpsing. These images were printed for the first time in 2003, when Phaidon published “A Year in the Life of Andy Warhol”, which featured the secret photographs of Warhol and the New York art world. The images included in the book are paired with descriptions and fun stories from times at the Factory.

McCabe witnessed and documented a coveted side of Warhol hidden from the general public. He once spoke about Warhol, saying, “He was a caring person and an incredibly creative individual… Deep down, I think he was just a regular guy… he was misunderstood by a lot of people. People want to think of him whatever they want to think of him. His greatest creation was himself—Andy Warhol himself. He was a piece of work.”

Although their relationship remained professional throughout the time they worked together, McCabe and Warhol shared a plethora of memorable moments which are documented through his photographs. McCabe joined Warhol on many of his adventures in 1964. These outings included watching Andy and Ralph Raushenberg play Monopoly, and visiting Philip Johnson’s famous glass house. 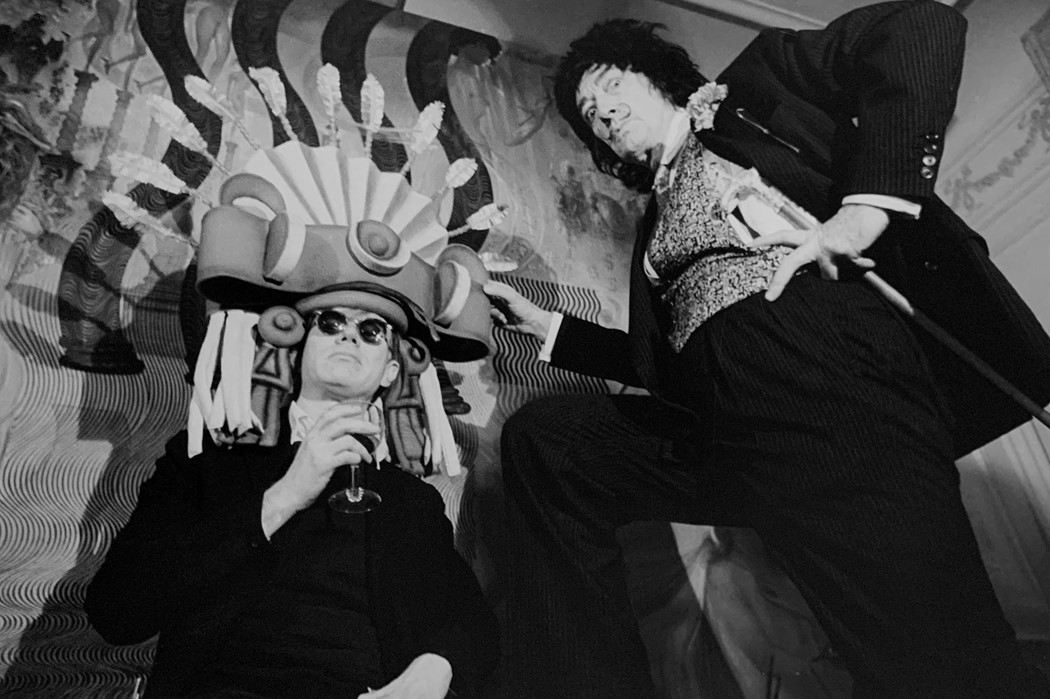 McCabe once said, “Looking back, I didn’t realize what a fantastic opportunity I’d been given. I was 24; I was just an aspiring photographer, and all of these people were pretty strange to me.”

McCabe authored a massive variety of photographs that exposed the mythos of The Factory and its eclectic patrons. David has also captured iconic images of other artist’s, such as when he snapped Warhol drinking wine with Salvador Dali. These iconic images have even been featured in a variety of other publications, including Life, Harper’s Bazaar, Mademoiselle, W, French Elle, French Vogue, and The Times.

Prior to being discovered by Warhol, McCabe worked as a commercial photographer for companies such as Harper’s Bazaar, Marlboro, and Neiman Marcus. In 1964, when McCabe was commissioned by Warhol, his career took an unexpected turn. This collaboration was mutually beneficial: McCabe developed his craft, while Warhol—in all his curiosity—could see the way he looked to the outside world.

After parting ways with Warhol in 1965, McCabe continued to photograph for various magazines and popular publications. He would later experiment with landscape photography and other subject matters.

McCabe’s photography gives Warhol fans insider access to the artist’s life and the dazzling Factory scene, which we couldn’t see without David’s magnificent work. McCabe’s legacy lives on, as his photographs will be adored for as long as Warhol fans walk the earth. 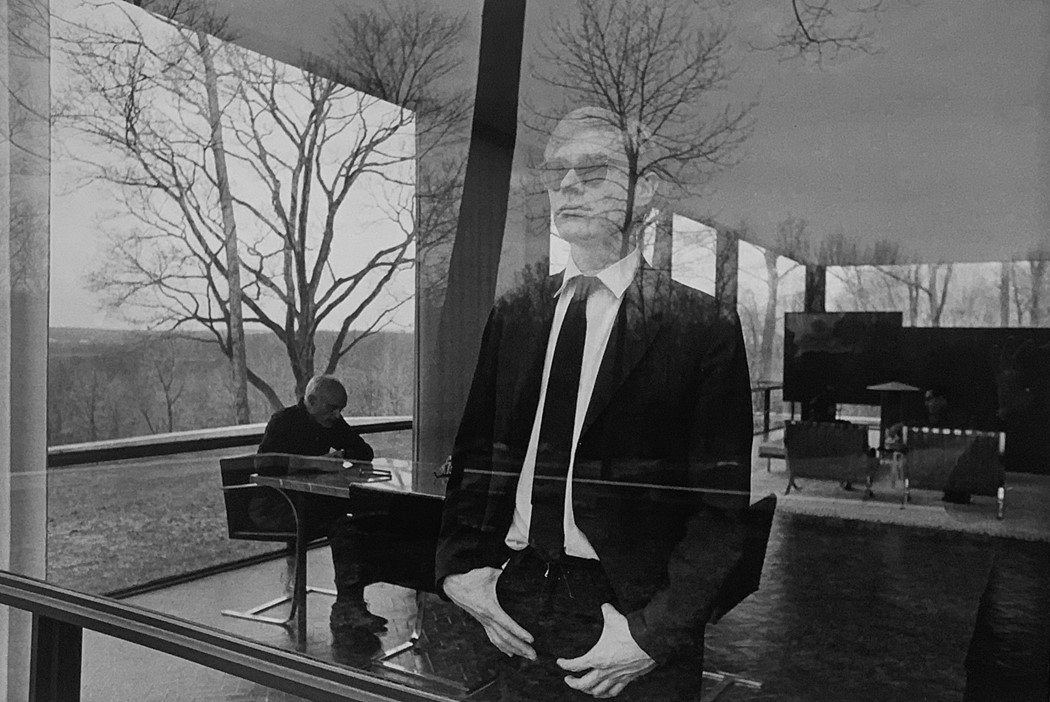