Chat with us, powered by LiveChat Electric Chair 82 by Andy Warhol | Revolver Gallery Skip to content 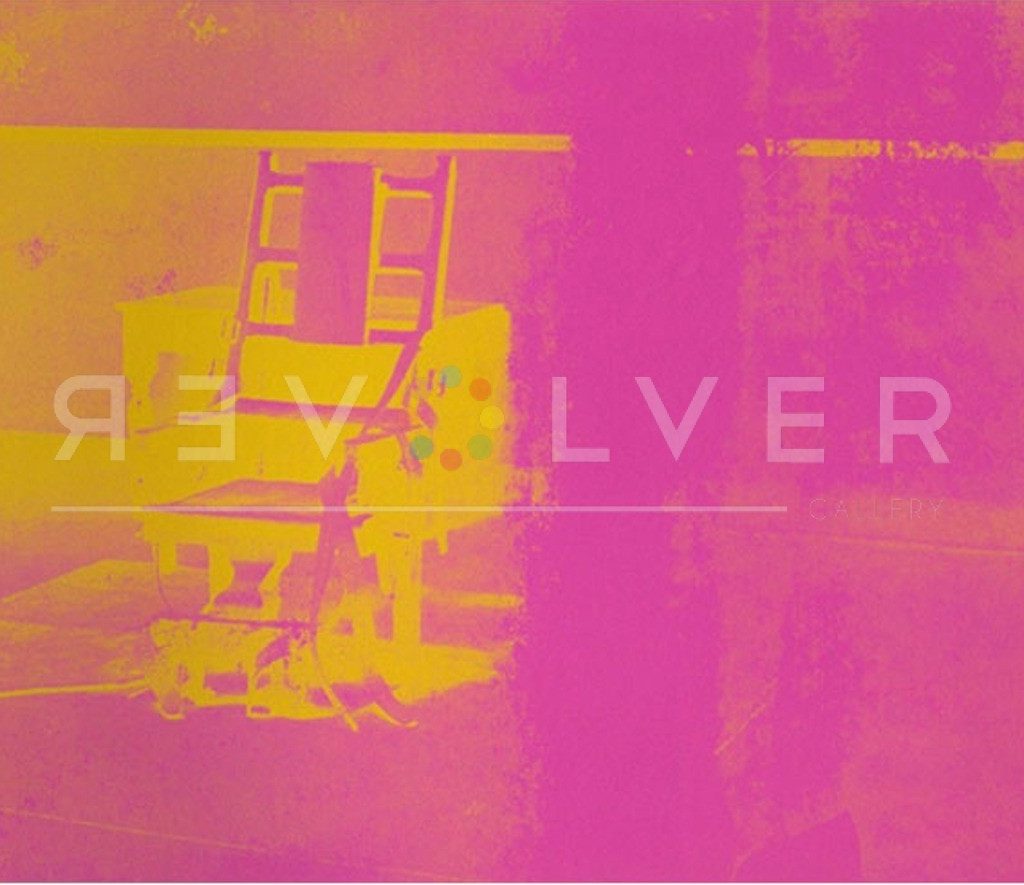 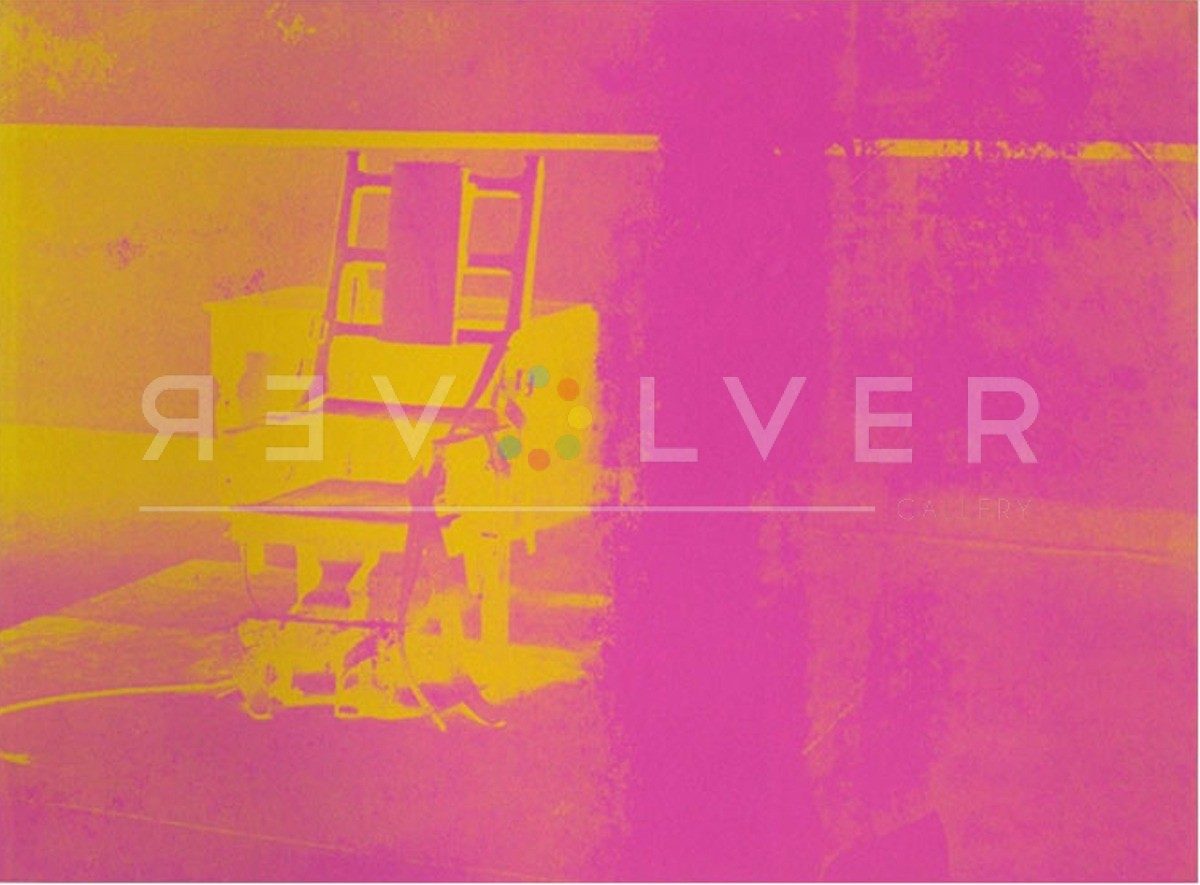 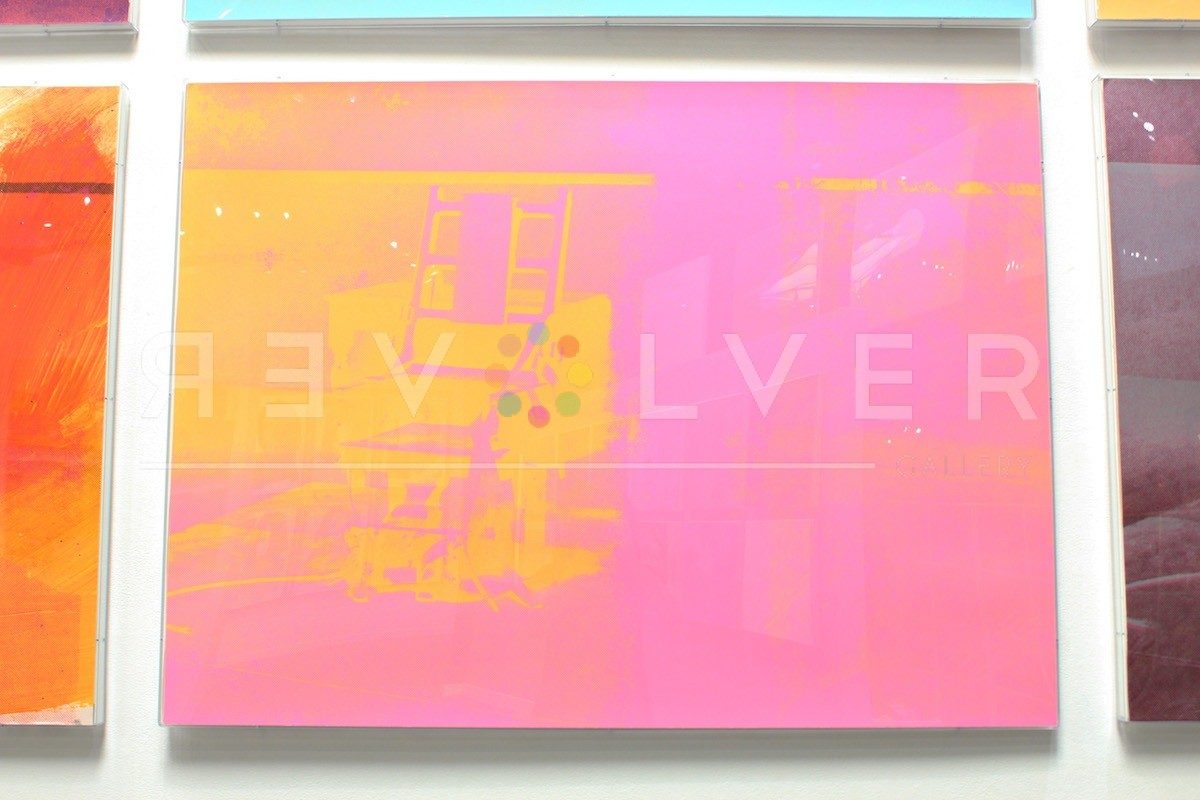 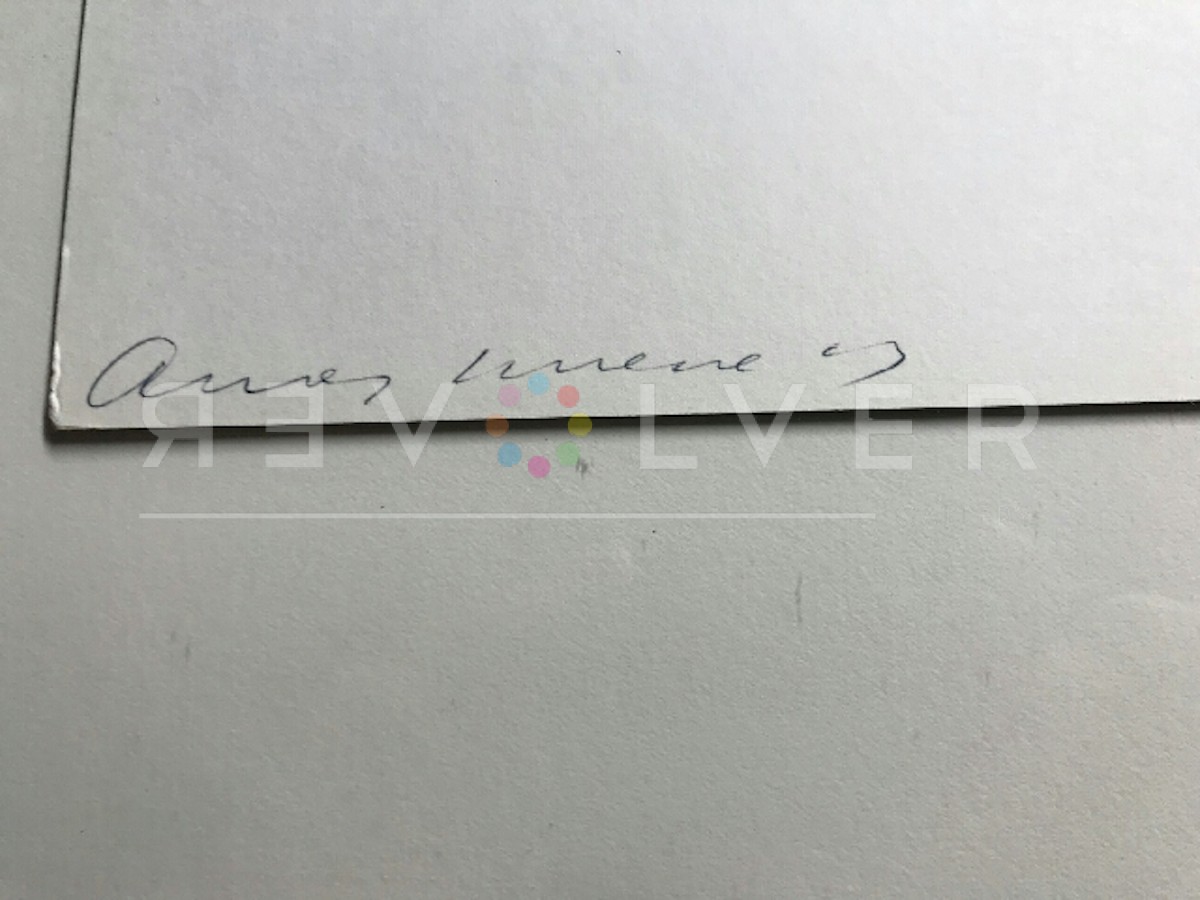 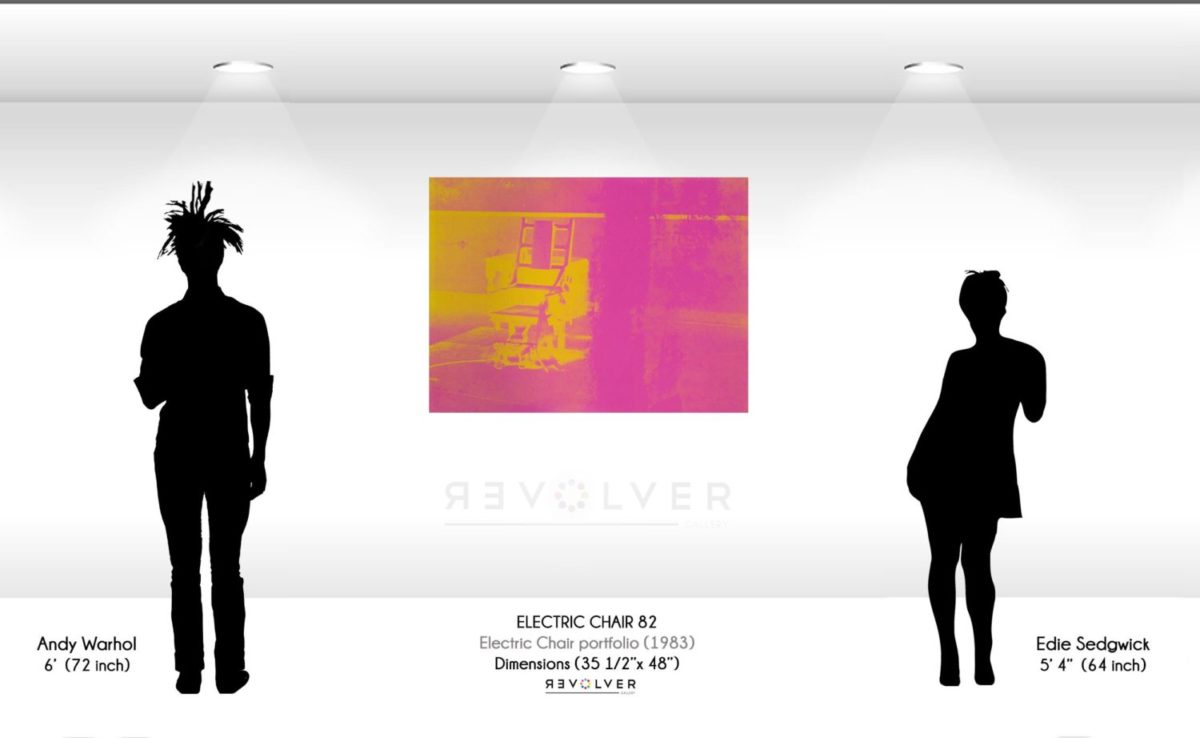 Electric Chair 82 by Andy Warhol is a screenprint from the artist’s notorious Electric Chair portfolio (1971). In the early 1960s, Warhol began creating prints of the electric chair as part of Death and Disaster, a loose collection of artworks depicting macabre images of death and violence, mostly appropriated from newspaper clippings. The death penalty was the subject of uproarious debate in New York City, and Warhol’s Electric Chair (1964) was met with both controversy and intrigue. He created a few more, mostly monotone Electric Chairs through the sixties, until publishing the Electric Chairs portfolio in 1971. Opposed to the earlier creations, Electric Chair 82 and other works in the series vary greatly in color and saturation. Notably, the complete Electric Chairs series from 1971 ranks amongst Warhol’s top 10 highest selling portfolios of all time.

The haunting series exhibits the instrument of death in an arresting scope of colors. Warhol created these stark images by using a 1953 press photograph of the death chamber at Sing Sing correctional facility. The photo depicts “Old Sparky”, the first electric chair used for mass executions. In total, the Sing Sing Prison executed over 600 people by electrocution. Not long after Warhol came to New York, the government sentenced Julius and Ethel Rosenberg to death for espionage amidst Cold War tensions. To publicize their deaths, the media released the image of the chair while Warhol and the rest of America observed.

The Electric Chair portfolio is a part of Warhol’s larger Death and Disaster series, a collection focused on the representation of violence, death, and tragedy in the media. Art curator Henry Geldzahler gave Warhol the idea for the series. “We were having lunch one day in the summer at Serendipity on East 60th Street and he laid the Daily News out on the table,” Warhol recalled. “The headline was ‘129 Die in Jet.’ And that’s what started me on the death series. The Car Crashes, the Disasters, the Electric Chairs…” Warhol was both fascinated and disturbed by America’s obsession with tragedy. To him, the media was an inescapable herald of catastrophe. Many of the Death and Disaster paintings, including Silver Car Crash (Double Disaster) rank amongst Warhol’s top 10 most valuable paintings of all time.

Electric Chair 82 displays the primitive device in gleeful shades of gold and hot pink, thus producing a highly unsettling effect. When placed next to a portfolio like Warhol’s Flowers, published one year prior, Electric Chair bears a strong resemblance in outward appearance. Both share the Pop Art movement’s signature neon colors, stripped-down subject matter and commercial allure. In the Electric Chair prints, however, Warhol presents the polarities at work in a way that is much more blatant.

Warhol juxtaposes the horror of execution with the candy-coated colors of advertisements, illustrating the relationship between the media and tragedy. While a news photograph such as this one portrays something disturbing and violent, its purpose is still the same as an advertisement: to sell an idea to the masses. When the Rosenbergs were executed on the public stage, for instance, Americans found a scapegoat for their fears of communism and bought into the hysteria surrounding their deaths.

“When you see a gruesome picture over and over again,” Warhol said, “it doesn’t really have any effect”. By repeating an electric chair over and over, Warhol attempts to diminish its power as a mechanism of fear. In addition, he mirrors the media’s constant echoing of death and tragedy. Along with the rest of the prints in this series, Electric Chair 82 is a transgressive work that shocks the viewer into acknowledging our society’s relationship with violence. 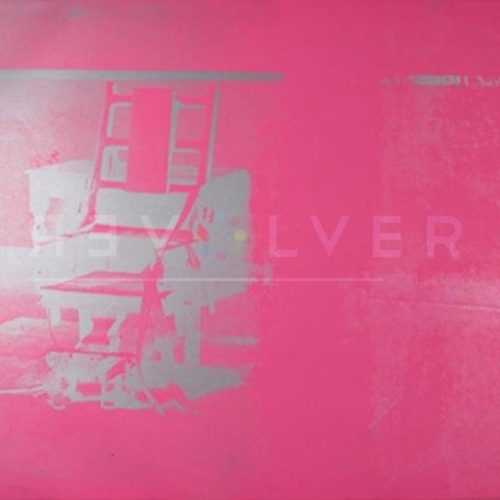 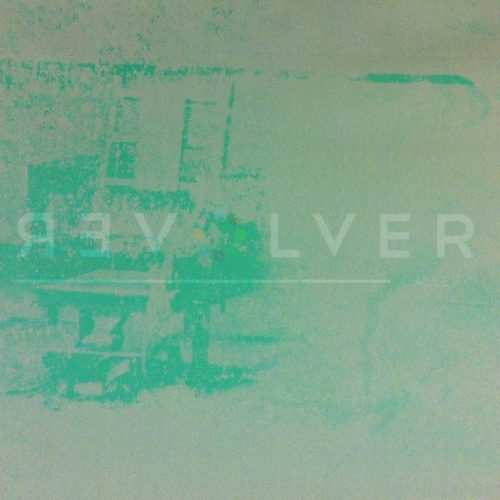 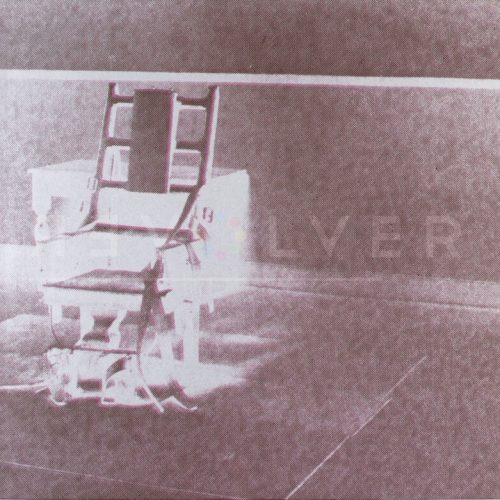 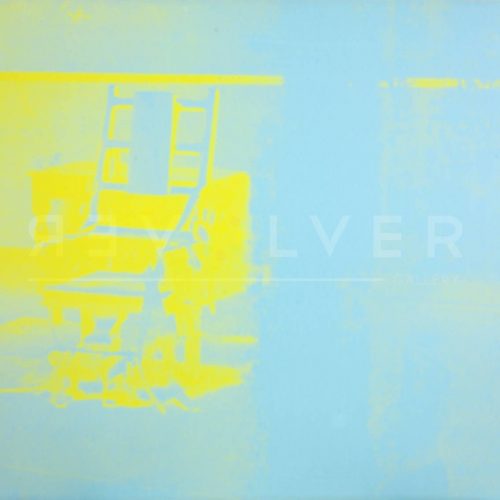 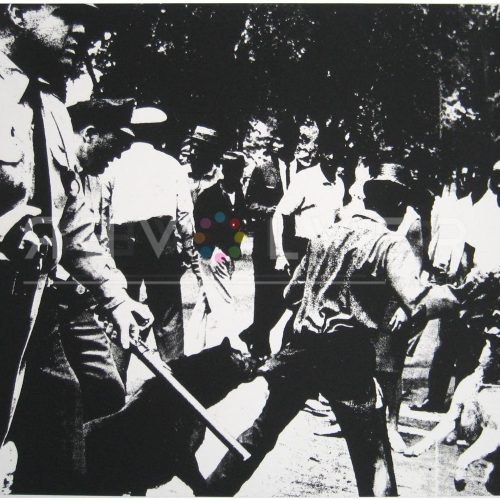