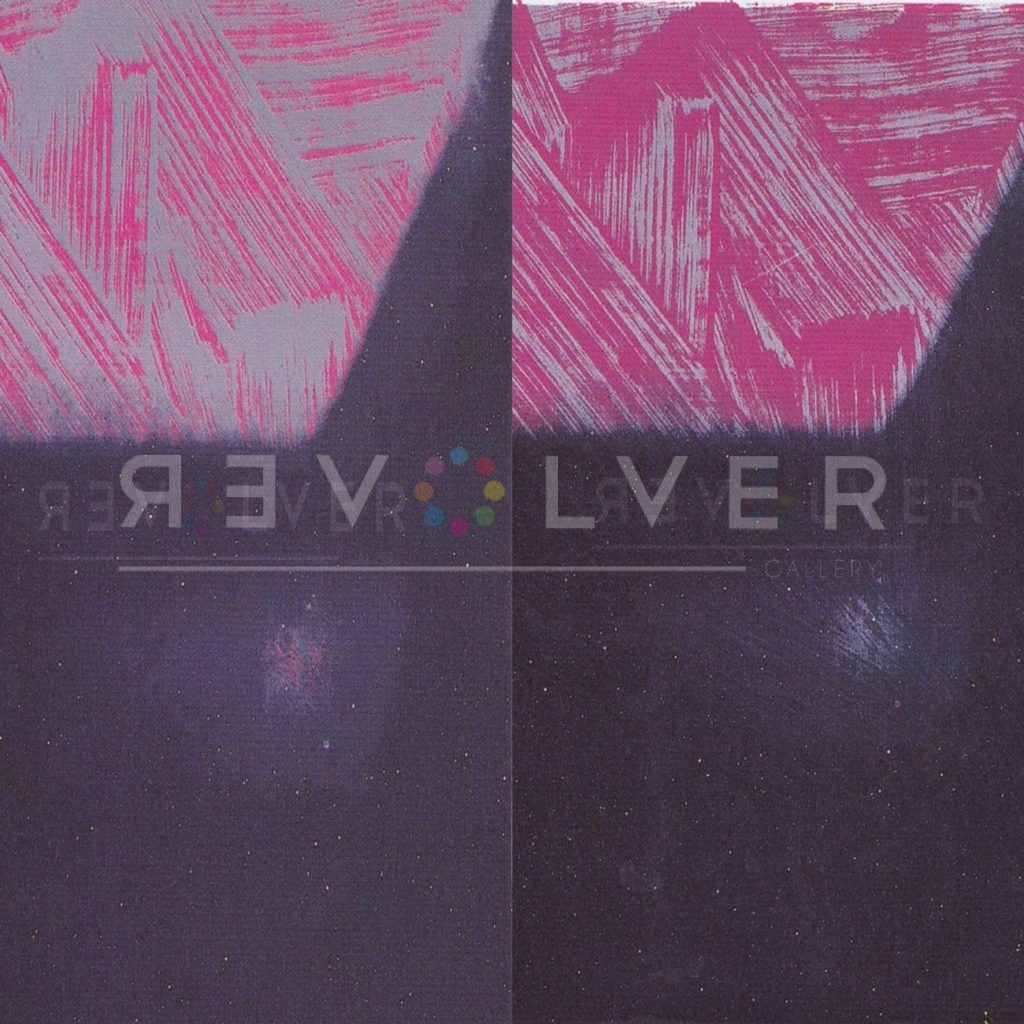 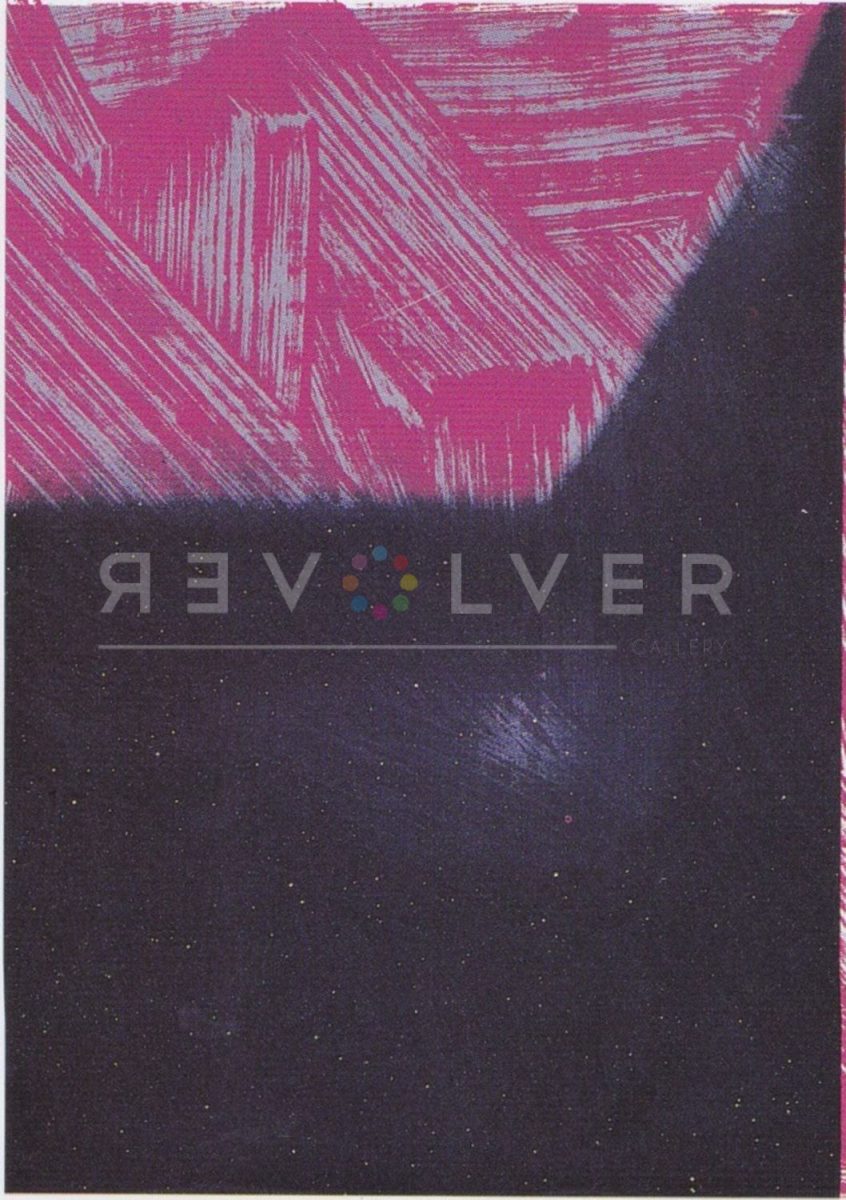 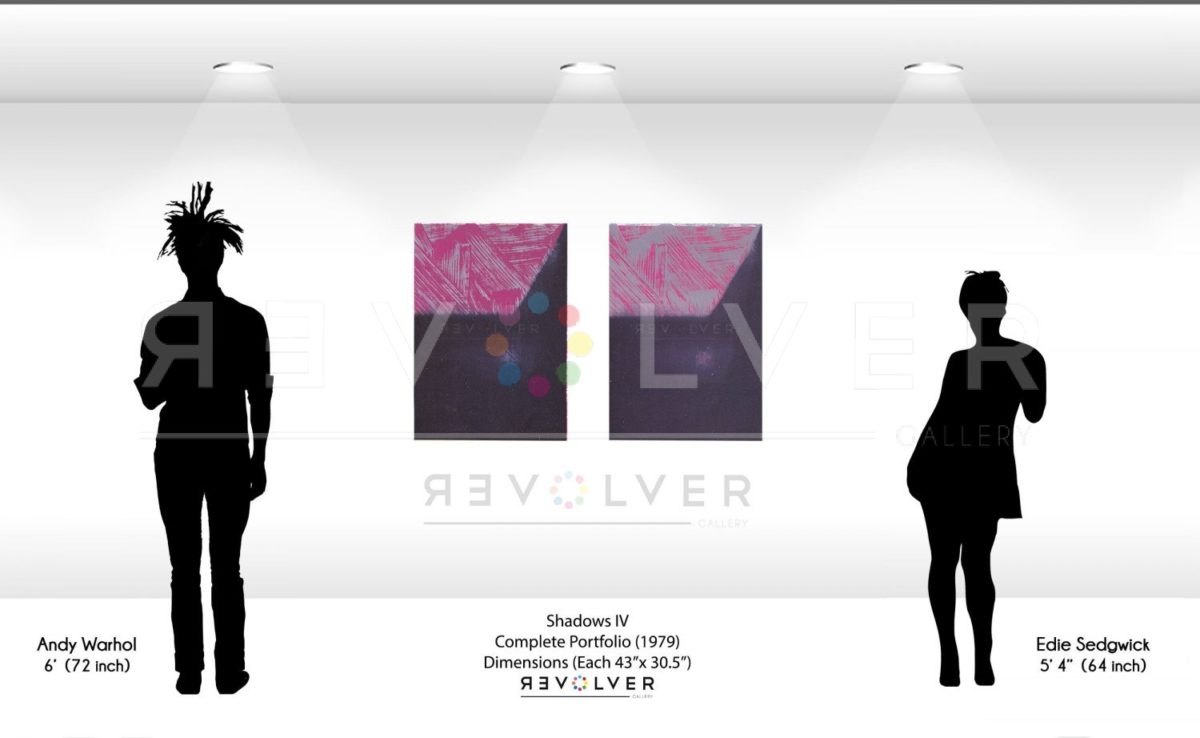 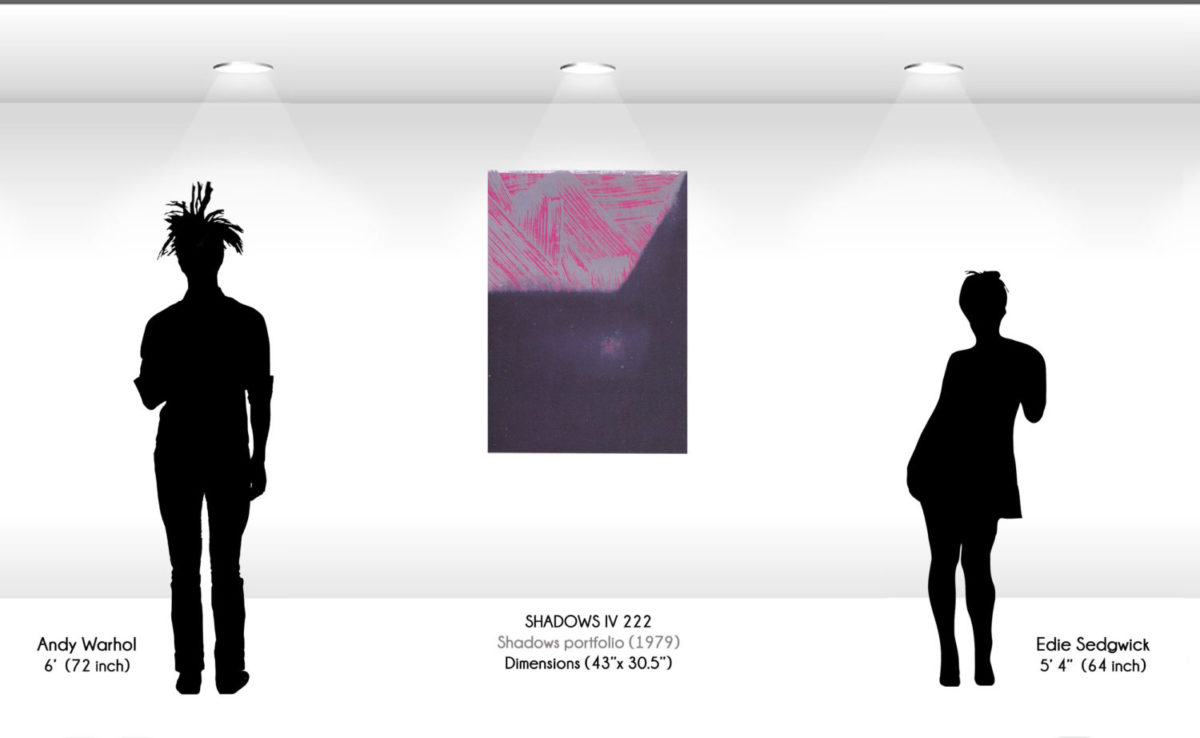 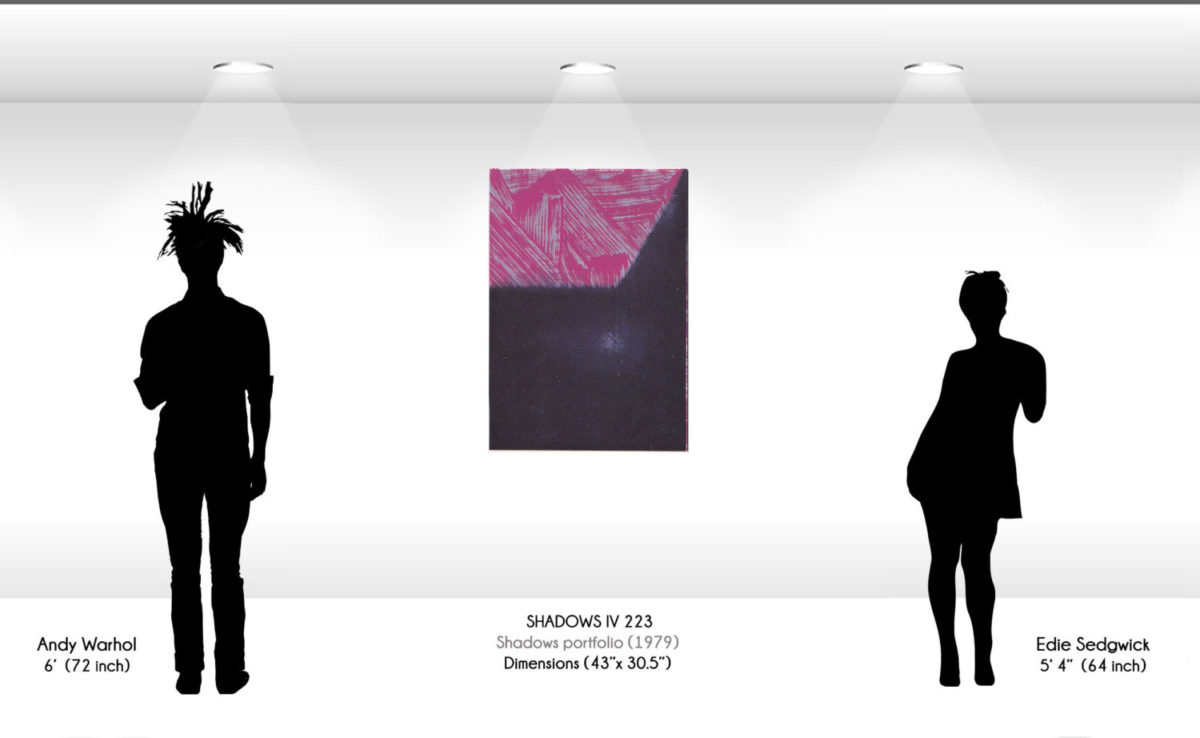 Edition: Portfolio of 2. Edition of 10 Signed and numbered in pencil on verso. Each print is unique.

Andy Warhol’s Shadows IV complete portfolio is part of his larger Shadows series, which consists of 102 individual painted canvases installed to form one continuous piece. These obscure forms are each printed in two colors. This series was originally conceived as room decoration, referring to this multiple part work as “disco-décor”. The large scale and color Warhol used in this work keep the viewer guessing what the subject might be, without looking at the title. The use of black in most of the prints portrays a dark moody feeling throughout the series. The Shadows prints are big, colorful filmstrip inspired images that evoke experimental film and the drones of the Velvet Underground. The work is mysterious and subtle as the shapes and color vary slight from one another.

Warhol himself never saw all 102 panels of the Shadows portfolio together. He left no instructions on the order in which to hang them and since the pieces are not numbered, they can be hung at random. Perhaps leaving room for play, he allowed viewers to have a new experience each time the panels are installed. This idea evokes a new concept, which is not seen in any of Warhol’s other works, as most of his pieces, although are made in a series, are meant to hang individually.

MOCA director Philippe Vergne describes Shadows portfolios as, “the line between the American dream and the American death. They are as dark as they are glamorous.” The individual interpretation each viewer has with the work makes this a powerful series in that unlike Warhol’s other works, the work is not straightforward or showcasing technique. The original 74 x 52 inch canvases reinforce the American ideal of “bigger is better.” Perhaps the abstract depiction could trigger us to believe Warhol was pointing out that to most things in life we believe bigger is better and that he did not feel the need to showcase actual objects or aspects in our lives that this phrase and rendering coincides with. The entire Shadows series includes the portfolios Shadows I (FS II.204-209), Shadows II (fs ii.210-215), Shadows III (FS II.216-221), Shadows IV (FS II.222-223) and Shadows V (FS II.224-225).

Warhol is well known for his images of popular culture and the repetition of those images. Although Shadows IV diverts from the traditional mass media objects that Warhol famously created, the series illustrates his interest in creating works that all bear the same compositional aspects, yet are still able to hold onto their individual uniqueness. Warhol published Shadows in 1979 under his own name in collaboration with his “master” printer, Rupert Jasen Smith. 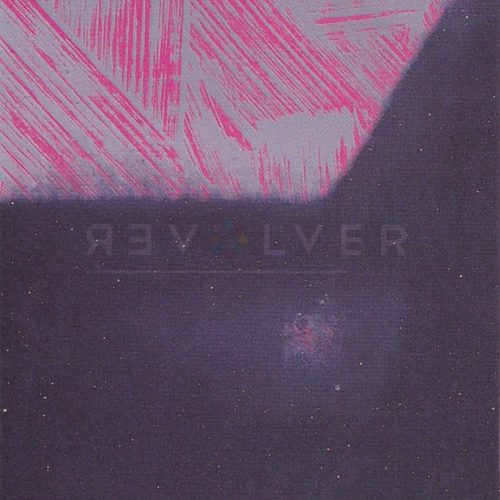 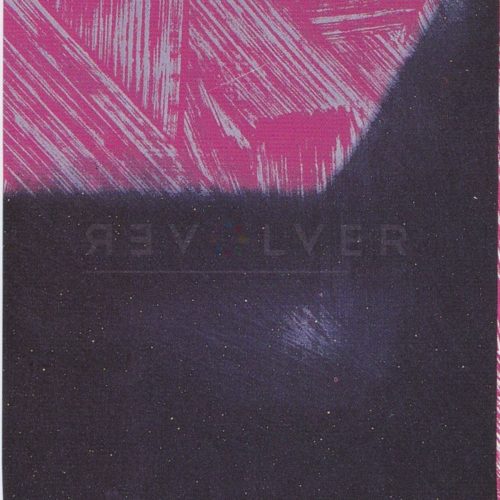 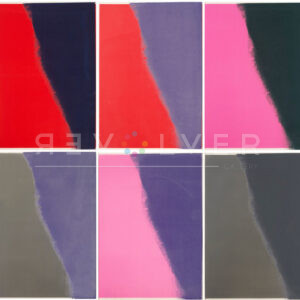 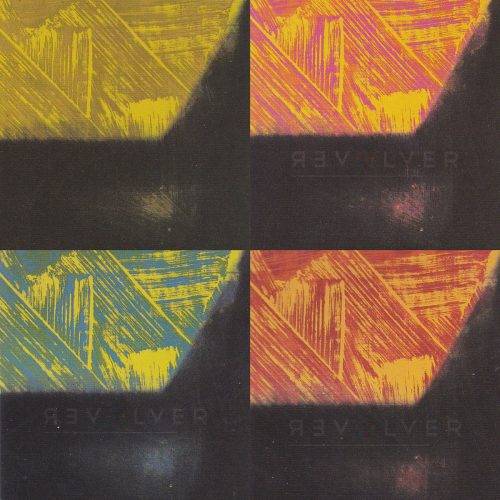 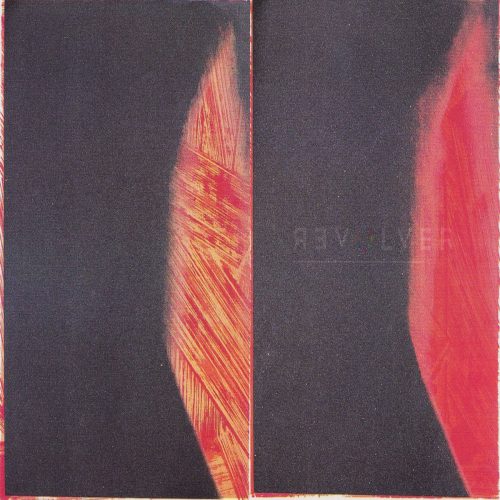 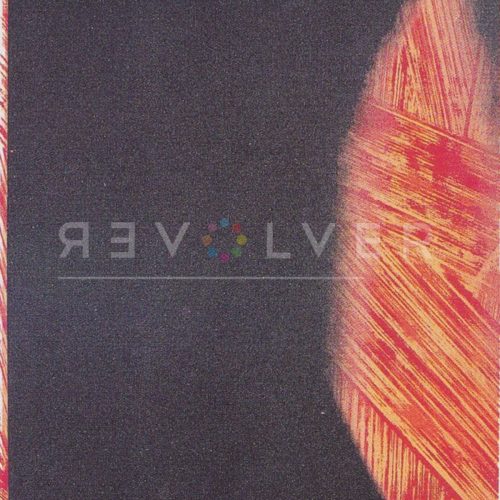 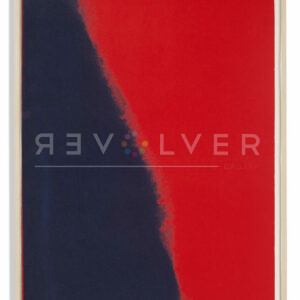 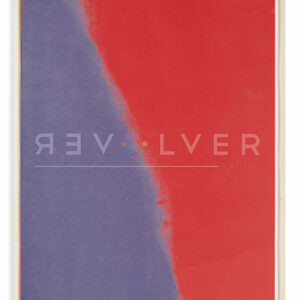