Andy Warhol really was a jack of all trades. Among being the king of Pop Art, Warhol was a popular New York socialite, businessman, and overall enigmatic character. Andy Warhol left behind a variety of artworks and words we can commemorate him by. Here are 10 of the artist’s famously witty quotes. 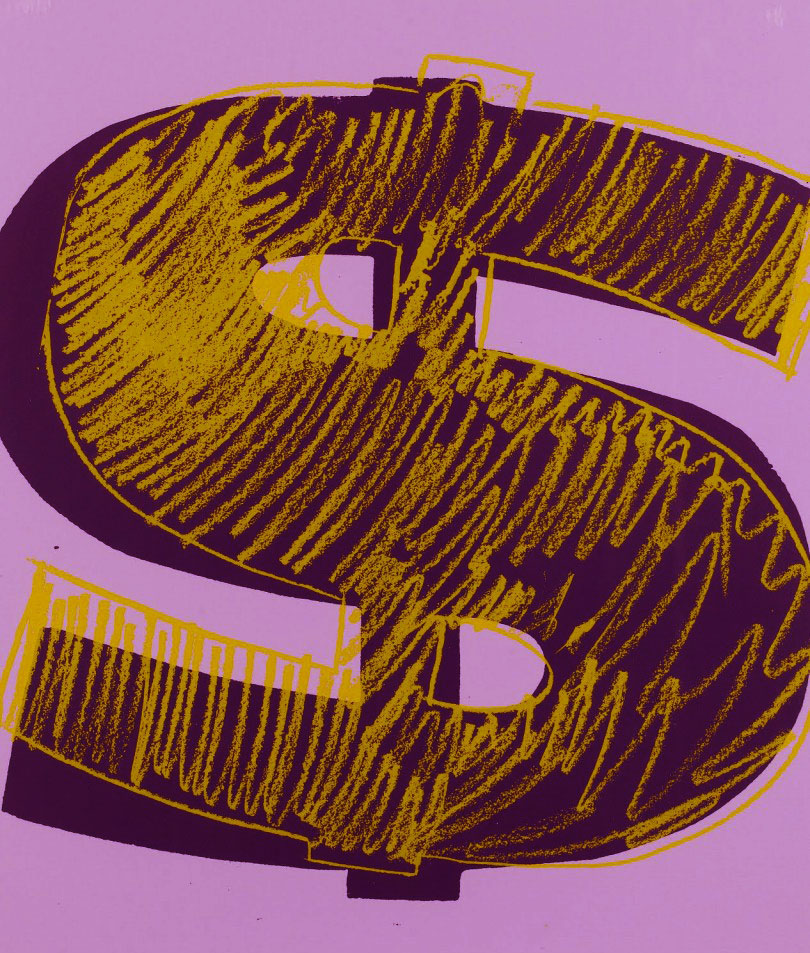 Andy Warhol was as much of a businessman as he was an artist. Prior to becoming the Prince of Pop Art, Warhol worked as a commercial artist and illustrator. Since the start of his career, Warhol has been inspired by consumerism culture and wealth, which is shown through his body of work. Warhol created his Dollar Sign portfolio in 1982, which features a collection of brightly colored dollar signs.

This series represents Andy Warhol’s fascination with money and fortune. He once wrote in The Philosophy of Andy Warhol, “I like money on the wall. Say you were going to buy a $200,000 painting. I think you should take that money, tie it

up, and hang it on the wall. Then when someone visits you the first thing they would see is the money on the wall.” By creating his Dollar Sign portfolio, Warhol quite literally put money on the wall, welcoming the viewer to ponder the commodification of art.

2.“Art is anything you can get away with.” 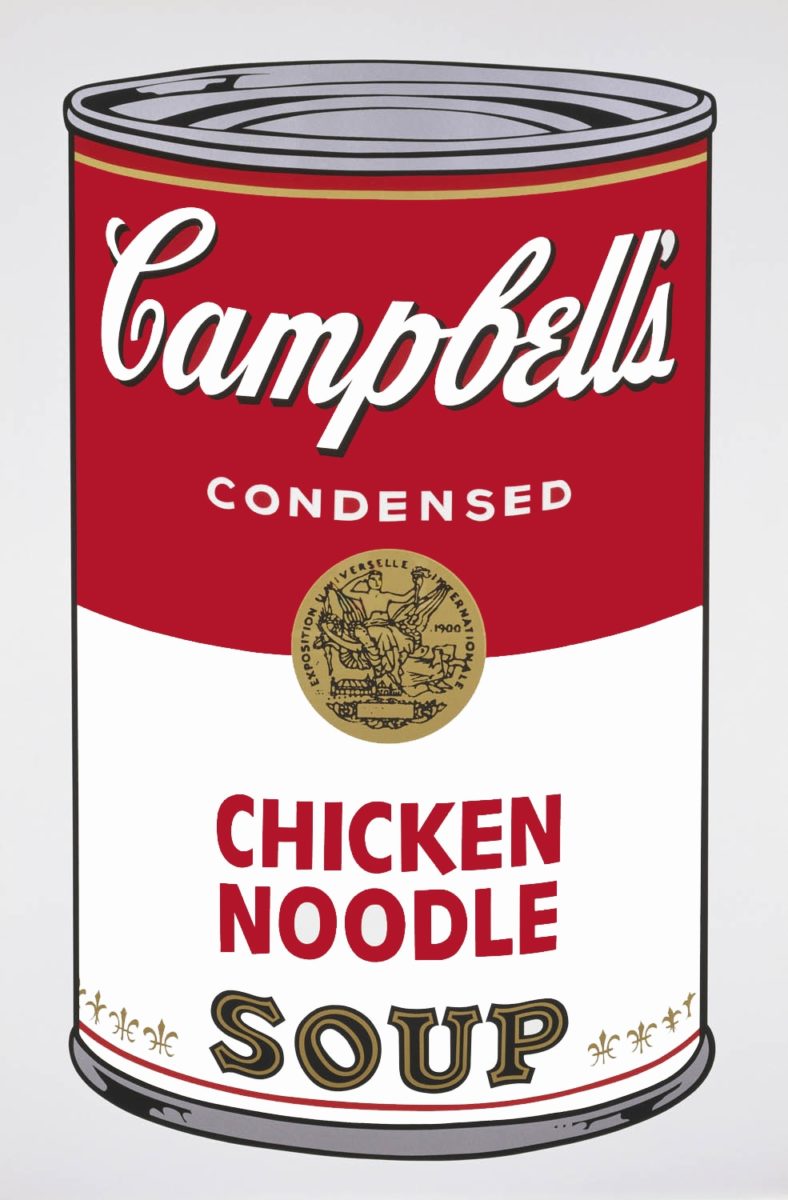 Andy Warhol and other famous pop artists redefined mainstream notions of artistic merit. Warhol did this especially with his Campbell’s Soup cans, by appropriating a commonplace object and presenting it as a work of fine art, therefore insisting on its artistic value.

3.“What’s great about this country is that America started the tradition where the richest consumers buy essentially the same things as the poorest. You can be watching TV and see Coca-Cola, and you know that the President drinks Coke. Liz Taylor drinks Coke, and just think, you can drink Coke, too. A Coke is a Coke no amount of money can get you a better Coke than the one the bum on the corner is drinking.” 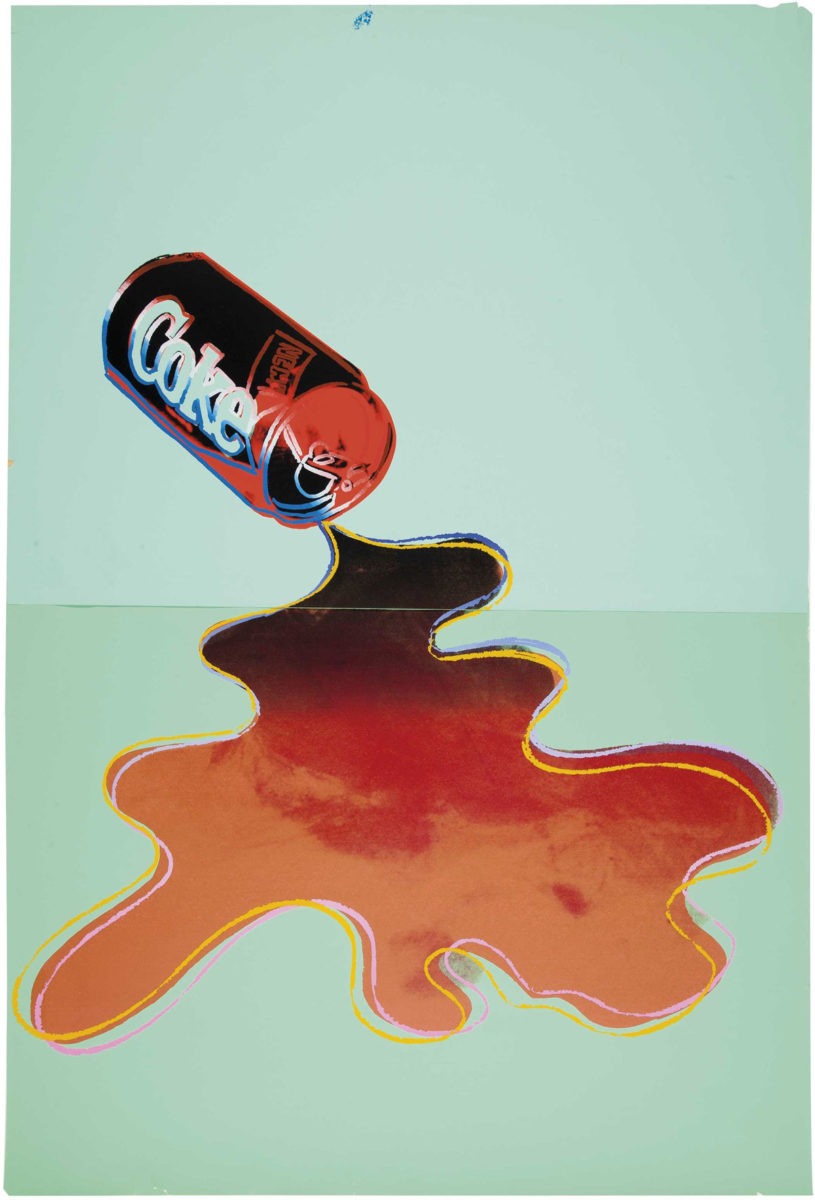 Andy Warhol was known for appropriating images of consumer culture. One image Warhol worked with was the Coca-Cola bottle, which is now recognized as a famous symbol for the pop art movement. In 1962 Andy created his Green Coca-Cola Bottles, which shows the image of a single Coca-Cola bottle repeated in rows of seven high by sixteen across. His use of repetitive imagery hints at the topics of mechanical reproduction and consumerism.

Andy Warhol’s New Coke drawing from 1985 depicts a Coke can spilling over, leaving the viewer to wonder what may have caused the mess. The debut of ‘New Coke’ was highly debated, with some consumers complaining that the new formula was not as good as the original. Through his works which showcase the popular soda beverage, Warhol reminds his viewers that we are all one in the same.

4. “I used to have the same lunch every day, for 20 years, I guess, the same thing over and over again.”

In 1962, Andy Warhol created his 32 Soup Cans series, which features different flavors of Campbell’s Soup. Not only did Andy have a clear fascination with consumerism and its products, he also expressed his personal connection to the company. When asked why he chose to create this body of work, Warhol simply replied, “I used to have the same lunch every day, for twenty years, I guess, the same thing over and over again.” 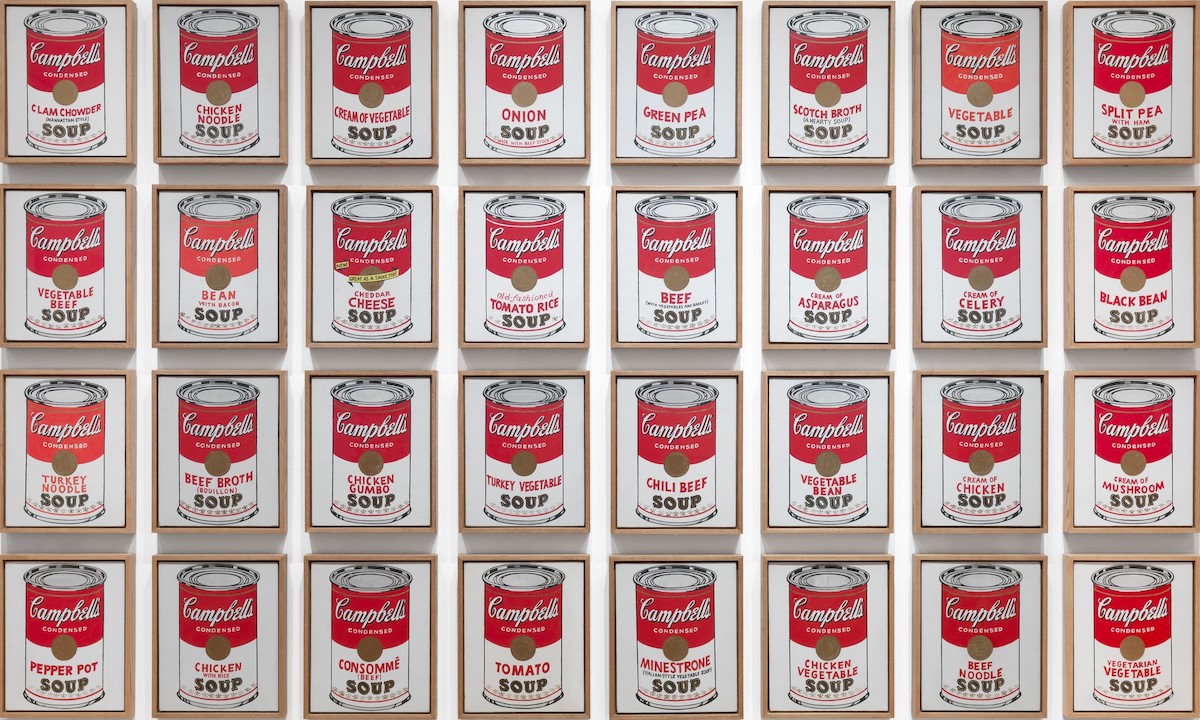 Warhol’s love for mass-production, advertisement and Campbell’s soup all morphed together to create these portfolios. Although Campbell’s soup cans are arguably some of his most notable works, the artist received some backlash after showcasing his original 32 Campbell’s Soup Cans series. Due to the unfamiliar subject matter of Warhol’s Soup Cans, some people questioned the significance of his work. Warhol’s soup cans and their value are still debated to this day, fifty-nine years after their original debut.

Despite some of the initial criticism Warhol received after showing his Campbell’s Soup cans, the work helped launch his career after its showing at his first exhibition in 1962. Warhol’s Campbell’s Soup Cans soon became the quintessential Pop Art image.

5. “I just happen to like ordinary things. When I paint them, I don’t try to make them extraordinary. I just try to paint them ordinary-ordinary.” 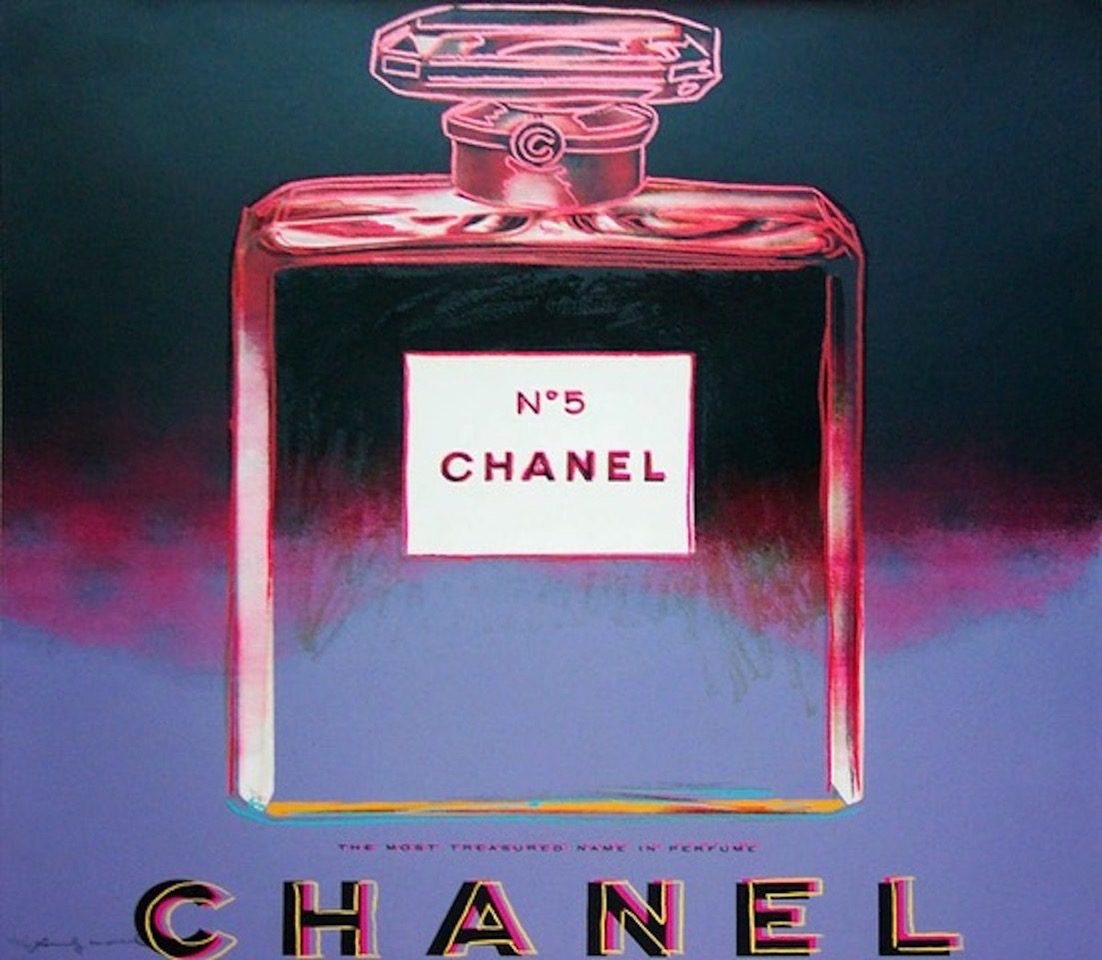 Because of his objective, everyday subject matter, Warhol was often criticised for his works depicting objects such as Brillo Pads. Instead of creating overly complicated compositions, Warhol simply allowed the paintings to speak for themselves by creating simplistic and familiar works.

6.“My idea of a good picture is one that’s in focus and of a famous person.” 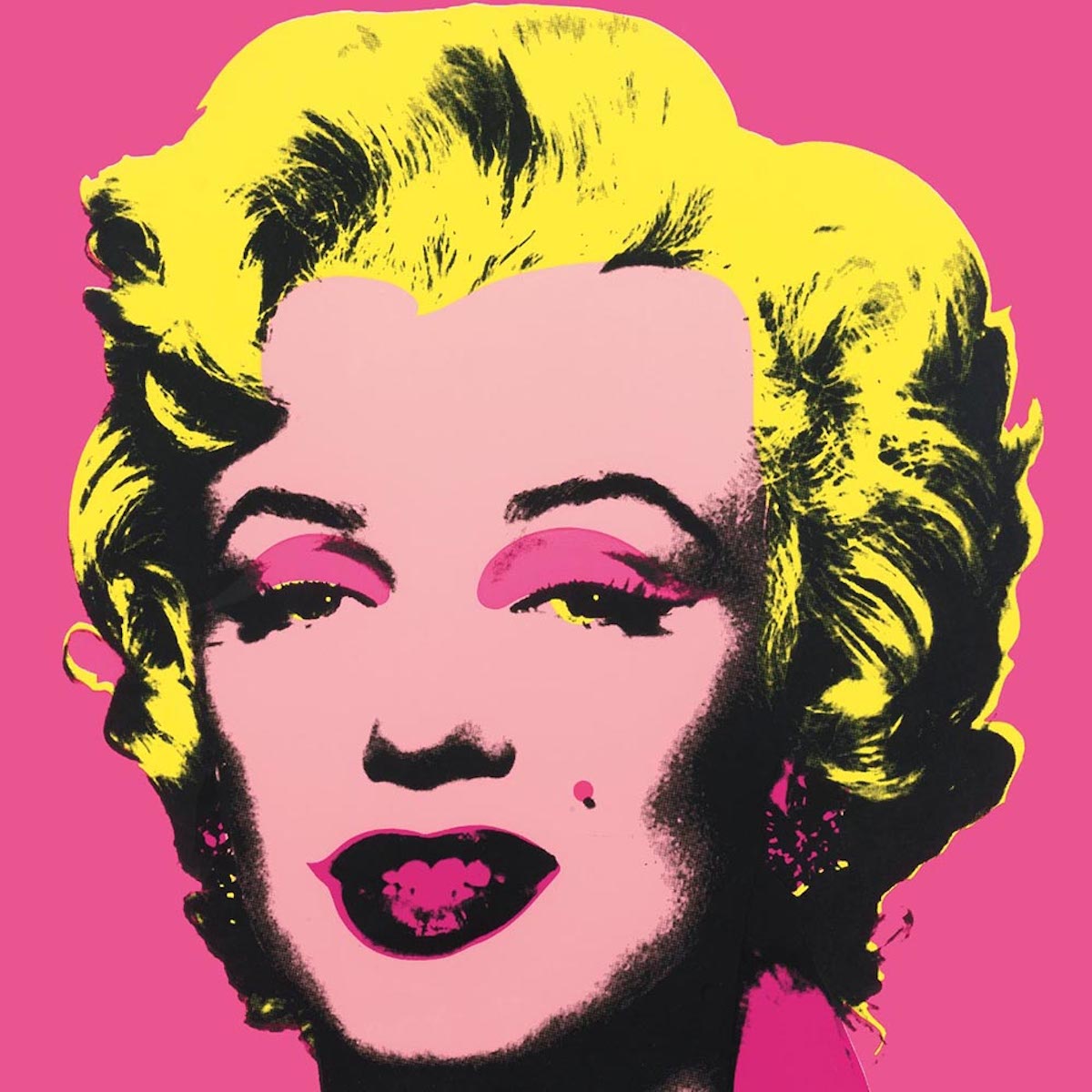 Some of Warhol’s most coveted works feature famous figures and celebrities. One of his most recognizable muses was Marilyn Monroe. Marylin Monroe 31 is one of a series of ten screenprints of the actress, which is based on an image of her from her 1953 film Niagara. Warhol began creating his Marilyn portraits shortly after her death in 1962. Among his images of Marilyn, Warhol created screenprints of other celebrities and movie stars including Elvis Presley, Elizabeth Taylor and Mick Jagger.

7. “My fascination with letting images repeat and repeat – or in film’s case ‘run on’ – manifests my belief that we spend much of our lives seeing without observing.” 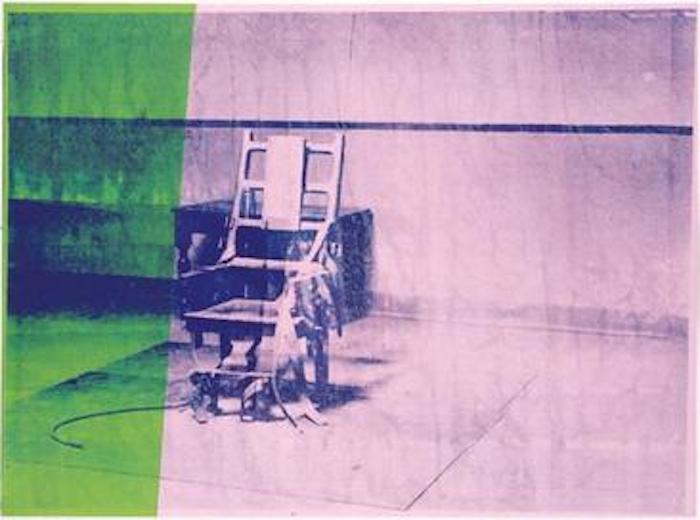 Andy Warhol’s infamous Electric Chair images are a part of his Death and Disaster series from the 1960s, which was focused on society’s fascination with death. Like many of his other works, Warhol used repetition to relay his ideas to the public. Many of the Death and Disaster works present the same image printed repetitively, sometimes in a variety of color combinations. The artist once explained, “When you see a gruesome picture over and over again, it doesn’t really have any effect” (What is Pop Art? 60). Andy Warhol used repetition to reiterate his messages, while also commenting on mass media’s constant depictions of violence.

8.“I’m for mechanical art. When I took up silk screening, it was to more fully exploit the preconceived image through the commercial techniques of multiple reproduction.” 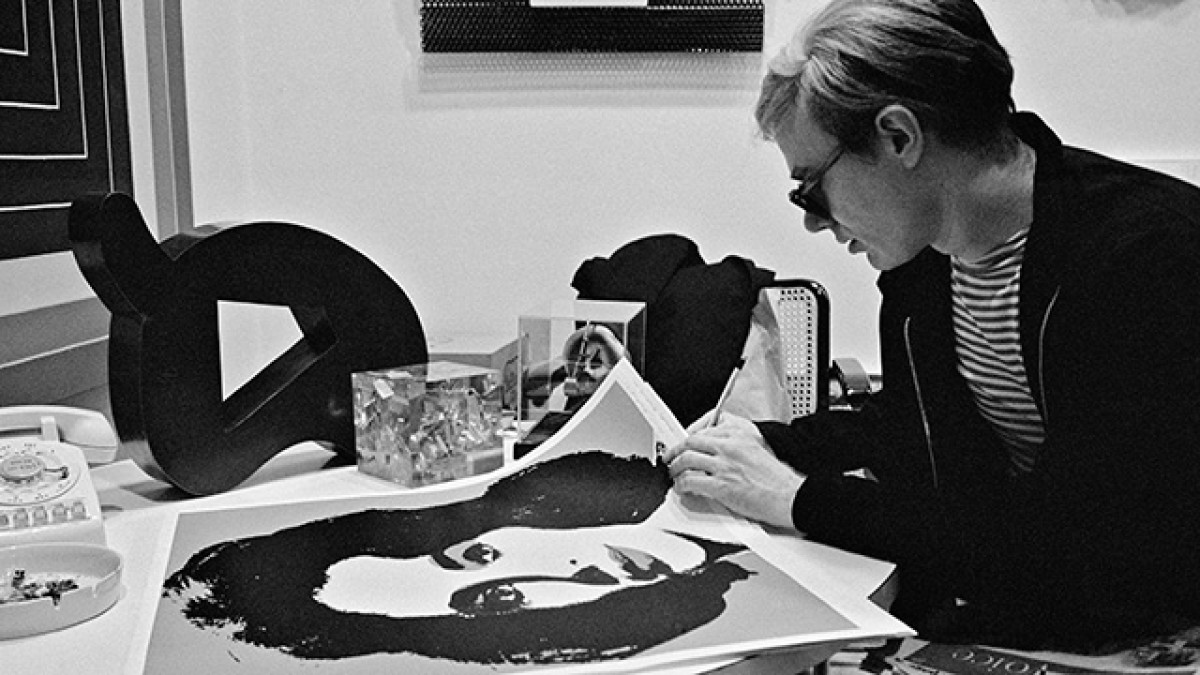 Although Warhol began as a painter and illustrator, everything changed with screenprinting, which Warhol used for its reliable and precise results. This new creative development allowed artists like Warhol to create multiple copies of a single work, mass producing their detailed images in a more accessible and inclusive way. By using this new technique, Warhol was able to achieve a nearly identical and accurate outcome. Even the process in which he created these prints emulated the sense of industrial production. This advancement completely changed the trajectory of Warhol’s career, allowing him to achieve a massive level of output.

9.“Every song has a memory; every song has the ability to make or break your heart, shut down the heart, and open the eyes.” 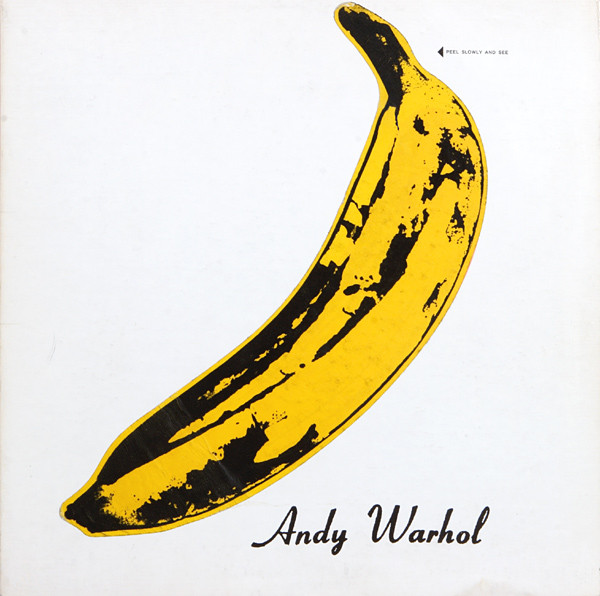 Andy Warhol is one of the most famous artists of the 20th century, who made his mark not only in the world of visual art but the music industry as well. The Pop Art King was introduced to many musicians during his exposure to the celebrity nightlife scene of New York. Warhol came into contact with many talented individuals at his studio, The Factory, which led to lifelong friendships with artists such as John Lennon and Mick Jagger. Andy Warhol was a multifaceted artist whose work had an immense impact on pop culture.

It is no surprise that Warhol had a clear fascination with fame. His love for these stars and their extravagant lifestyles became a common theme in his work. The artist created a variety of iconic album covers for top artists such as The Rolling Stones and Dianna Ross. Prior to his death in 1987, Warhol had designed more than 50 album covers. He was a powerful influence on the music industry, which heavily influenced his life and artwork as well.