Through Andy Warhol’s most valuable portfolios, we can glimpse a large selection of his work and witness some of the most influential elements of his oeuvre, as well as the themes that inspired him the most. Andy’s project of chronicling pop-culture and recreating some of the most important images of our lives have cemented his legacy in the art world forever. As a result, his work continues to sell for top dollar to this day. In Andy’s top 10 portfolios, we will see a wide range of his work, from early kickstarters of the pop-art genre to esoteric prints of political and mythological extravagance.

Warhol’s Cowboys and Indians portfolio is a gathering of an undeniably important realm of American history. The work includes our society’s imagination of the American West, and the simulation of Native American culture found in America’s media. We often view Native Americans as symbols of the past. To many, they represent a “naturalistic” way of living before technological and industrial advancement created modern civilization and the woes of 20th century existence. Andy Warhol combines pictures of Native American culture with their counterpart of Western colonial power.

To study for the portfolio, Andy went to New York’s National Museum of the American Indian and took photographs of a Plains Indian shield, a Northwestern Coast mask, and kachina dolls. The series includes the paintings John Wayne, Annie Oakley, General Custer, Northwest Coast Mask, Kachina Dolls, Plains Indian Shield, Mother and Child, Geronimo, Indian Head Nickel, and Teddy Roosevelt. Each of the paintings in the portfolio are signed in pencil and labeled “II/X,” except for John Wayne which is labeled “UNIQUE.” The portfolio of ten 38×38 inch paintings sold for $542,900 at Christie’s in London on March 18th, 2020.

When many people think of Andy Warhol, they think of his ultra-famous Campbell’s soup cans. What might seem a pointless 1:1 reproduction to some, the soup can series evokes a central part of Warhol’s philosophy. The repetitive nature of mass production fascinated Andy intensely, so much so that he dubbed his own art studio “the Factory”. Indeed, he saw great perfection and convenience in the everyday commodities of consumer culture. Campbell’s soup, already a staple source of food for millions of Americans, became even more of an icon when Andy recreated them. This is his second Campbell’s Soup portfolio, debuting one year after his first Campbell’s screen prints and seven years after his original soup paintings. This portfolio of 10 Campbell’s soup cans, stamped 178/250, sold for $620,000 at Sotheby’s in New York on April 29th, 2019. Andy signed each 35×23 inch screenprint in ballpoint pen on the verso. 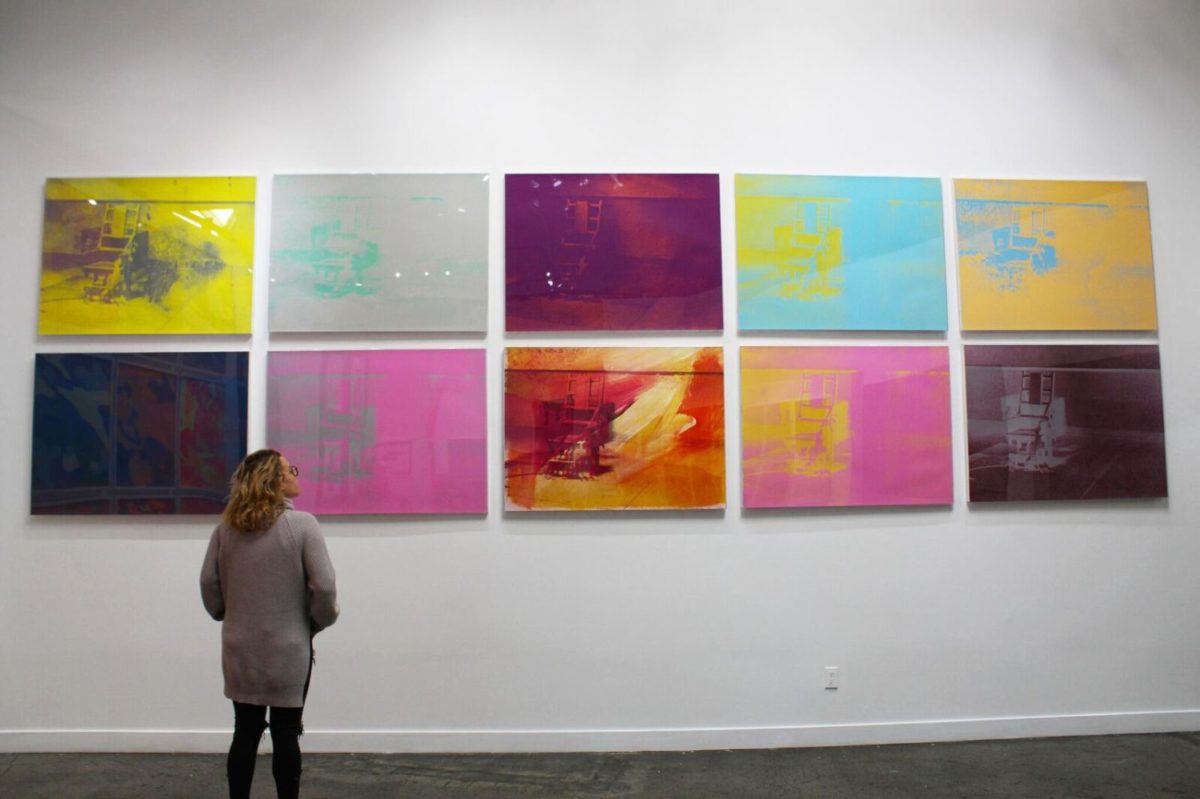 Warhol once said “You’d be surprised how many people want to hang an electric chair on their living room wall. Especially if the background color matches the drapes.” The Electric Chair portfolio is a recreation of the electric chairs in Andy’s Death and Disaster series from 1963. Overall, the work calls to mind the political debate surrounding the death penalty in America, and the gloomy conclusion some criminals face. In an interview with BBC, Warhol was asked why he was painting an electric chair. He responded calmly, saying, “Oh, I just think they’re beautiful.” However, Electric Chair, along with the whole Death and Disaster series, acts like a commentary on the persistent presence of death in mass media. By appropriating such violent images from news reports, Warhol reflects on the constant spectacle of tragedy, and the desensitization it brings.

The prints show an electric chair in an empty room, and evoke a feeling of shadowy helplessness. A myriad of colors such as light blue, teal, orange, and deep purple bathe the electric chair in light. The image used in the piece came from a press release in January 1953 with a photograph of the execution chamber at Sing Sing Prison in New York. The complete portfolio of 10 silkscreen images on 35×48 inch wove paper sold for $629,000 at Christie’s in New York on November 13th, 2014. Andy signed, dated, and stamp numbered each print XXI/L on the reverse.

Andy Warhol published Endangered Species in 1983 when environmental activists Ronald and Freyda Feldman asked him to create a series drawing attention to the fleeting population of certain beloved animals. Andy loved animals, and would carry his dachshund, Archie, almost everywhere he went. In fact, he even called him his “alter ego.” Andy embraced the project and produced portraits of the endangered species as “animals in makeup.” Similar to the figures in his other works, he incarnated the animals with his touch of fame, elevating them to celebrity status. Endangered Species sold on Heritage Auctions for $725,000 on October 28th, 2015, making it the seventh most valuable Warhol portfolio of all time. Each 38×38 inch print is labeled 103/150 and signed in pencil. Andy Warhol’s Mick Jagger portfolio is one of his most famous series. Unlike some of Warhol’s other artistic subjects, he was very close with Mick Jagger and his family. They met in 1964 before the Rolling Stones really made it big in America. Warhol painted the series of the iconic and influential frontman in 1975, after previously designing the Stones’ album cover for Sticky Fingers in 1969. Warhol took polaroids of the rock star, exhibiting various facial expressions, and then painted the screen prints in collage-like style. The prints stand out amongst some of Warhol’s other work. Andy overlays the rock star with opaque colors, rugged lines, and scattered shapes. Warhol signed each print in pencil, and Jagger signed some of them in felt pen. The complete portfolio of 10 prints sold for $817,000 at Clars Auction Gallery in Oakland, CA, on June 14th, 2020. They are each numbered 80/250.

In Andy Warhol’s Myths series from 1981, he created ten prints that showcase popular imaginary characters of 20th century media. The work includes childhood heroes, villains, cultural symbols, and himself. Capturing contemporary mythological figures, the portfolio ranges from the gorgeous portrait of Greta Garbo as the infamous Mata Hari, to Uncle Sam, Mickey Mouse, and Santa Claus. Myths is steeped in variety, and offers something adorable to an audience of all ages.

For this series, Warhol enlisted his friends to dress up in costumes before capturing their portraits and painting over them. Additionally, Warhol paints himself as The Shadow: a crime-fighting hero from a radio show in the 1930’s. Shadowing over the portraits as their true author, Warhol is surely the hero of the series. Myths sold for $867,000 at Sotheby’s in New York on October 22nd, 2020. Each 38×38 inch print is signed in pencil and labeled 72/200.

“I always notice flowers,” says Andy in Andy Warhol’s Party Book from 1988. The original Flowers prints debuted in 1964 at the Leo Castelli gallery in New York, and were a huge success. They have since become a staple of his greatest work, and are some of the most recognizable Warhol images.

The flower portrayed in this portfolio is the exceptionally rare Mandrinette flower, which is native to the island of Mauritius. The picture used for the portfolio was taken from a June 1964 issue of Modern Photography including photos by Patricia Caulfield. After she saw that Andy appropriated her copyrighted photo, Caulfield filed a lawsuit against him. Andy offered repayment in the form of his art, but she refused. This soon led Andy to lean towards taking his own photographs and becoming more wary of copyright laws. Andy Warhol’s Campbell’s soup cans are amongst his most iconic and valuable works. People who know nothing about Warhol at least recognize his soup cans. Campbell’s Soup I is the first series created after the original 32 Campbell’s Soup Cans which debuted at the Ferus Gallery in Los Angeles in 1962, receiving critical acclaim (and controversy). With the soup series, Andy transformed the everyday commodity into high art, and launched the pop-art genre to the mainstream.

Above all, Andy’s interpretation of the soup cans involves his fascination with consumerism and mass-production. Andy saw how quotidian products (though mundane) play a massive role in everyone’s life. For instance, no matter where you go, mass-produced commodities look and feel the same everywhere, presenting themselves as perfect. Andy especially liked the Campbell’s visual. It had stayed the same for decades, and remained a principal item of the 20th century household. He also claimed to eat the soup every day “for twenty years, I guess.”

The Mao portfolio is one of Warhol’s most famous and controversial works. It might seem strange to see a Chinese communist leader in Warhol’s work. Typically, he focused on pop culture and sensationalism in America. But political leaders are still famous. The world of politics is full of celebrities and controversy, and was therefore very interesting to Andy. After Richard Nixon’s visit to China in 1972, and the press coverage that followed, he became inspired to paint the communist leader.

Mao Zedong, like the celebrities of the Western world, garnered a large following of people who praised his character. Therefore, the Mao portraits can be understood to represent an intersection of Western media and politics with Chinese government and the country’s loyalty to Zedong. The portraits are reminiscent of his depictions of celebrities, as Andy cloaked the revolutionary in a myriad of deep colors. He also screened dark scribbles onto Mao in graffiti-like fashion. The complete portfolio of ten 36×36 inch prints sold for $2,545,189 at Sotheby’s in London on May 22nd, 2012. Each one is signed and numbered a.p. 1/50 on the verso. The most valuable Andy Warhol portfolio is the artist’s 1967 series of Marilyn Monroe. Perhaps his most famous work, Warhol’s Marilyn prints bring together many of his fascinations. As a subject, she incorporates many of Warhol’s central themes from throughout his career. Monroe’s extreme popularity interested Andy, as did her status as a sex-symbol in the 1950s. At the time, society’s attitudes towards sex were largely conservative. Marilyn broke the mold, just as Warhol did.

His fascination towards the superstar piqued after her suicide in 1962. As a result of her death, her reputation greatly evolved. This influenced Andy’s perception of fame and the phenomenon of socially significant people as symbolic of wider cultural moods. He reproduced several variations of Monroe at the Factory, evoking the strange allure of Hollywood and its projects. Most notably, Warhol saw how Hollywood has a way of mass producing people and images, commodifying the identities of celebrities and ultimately turning one’s personality into a consumer product. Above all, Marilyn Monroe’s place in Warhol’s catalogue effectively doubles her as an icon of glamour, fame, and art.