Chat with us, powered by LiveChat Warhol The Photographer: 7 Photographs and Portraits by Andy Warhol - Revolver Gallery Skip to content

Warhol The Photographer: 7 Photographs and Portraits by Andy Warhol 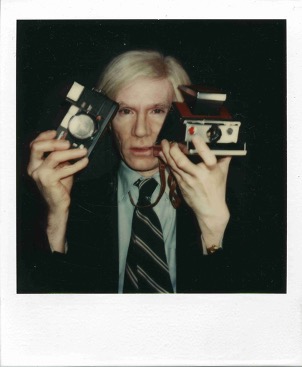 He wasn’t known for his photography. But chances are, if you ran into Andy Warhol on the busy streets of Manhattan, he’d have a camera with him. Photography was a medium that Warhol wouldn’t deeply explore until the mid-1970s, and the vast majority of his photographs were printed after his death. He was an obsessive photographer, taking more than 100,000 photographs between 1977 and 1987. In the retrospect of art history, Warhol was actually significantly instrumental in the growing acceptance of photography as fine art. Still, he is mostly known for his screen prints and paintings. However, as a medium that is closely linked with reproduction, it makes sense that Warhol fell in love with photography. After all, hyperreal photographs of people and things are the scaffolding for his body of work.

“A picture means I know where I was every minute. That’s why I take pictures. It’s a visual diary”. While Warhol liked to take photos for the sake of using them for silk screens, he also just loved to record his life. It’s no doubt that Warhol embodied something of the age of Instagram way before Instagram was ever conceived. And in a way, he may have predicted the creation of something like social media itself. As his most famous quote goes, “In the future, everyone will be world-famous for 15 minutes”. It’s true, Andy Warhol was documenting his life, much like we do now with Instagram, long before anyone could see it coming.

In the hands of Warhol, any means of artistic expression is multi-faceted, multi-purposed. Part of the reason he loved taking photos was simply his desire to create a visual diary; to preserve the moments and faces he encountered throughout his life. In another sense, snapping a photo is a method of capturing real life, a way to reproduce reality directly. “I want to be a machine,” he said. Thus, for Warhol, the photographic medium was a perfect way to practice his artistic philosophy. Whether he was taking portraits of celebrities with his famous Polaroid at the Factory, or roaming the streets with a 35mm Minox, photography became one of his favorite ways to create art. 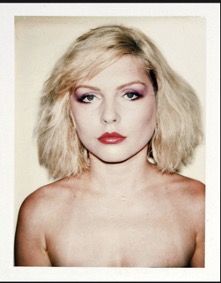 No doubt Debbie Harry was a Warhol super-star. She was a frequent member of his New York City entourage, and Warhol even featured her on the cover of Interview Magazine in June 1979. They met in the mid 1970s, during a time when the soon-to-be rockstar waited tables at the infamous Max’s Kansas City, a restaurant and bar where Warhol and his friends would frequently hang out. Soon after, Blondie released their first album in 1976, showcasing Debbie as their punk-rock frontwoman. The band became famous almost instantly, completing a European tour the next year.

Needless to say, Warhol quickly mused over her sensational fame and staggering beauty. She stood as a perfect blend of celebrity to include in his catalogue. The photograph is a perfect example of the polaroids he would make at the Factory, simple and clean against a white background. The same image would soon be used to create a screen print of the vocalist, becoming one of Warhol’s coolest silkscreen portraits. 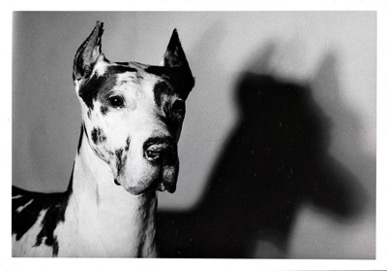 Andy Warhol loved animals. This one in particular, which Andy named Cecil, is a great dane that was said to “guard” his studio. The dog is actually a taxidermy. In fact, Warhol had a collection of taxidermy animals, and he bought this one in the late 1960s for $300. Allegedly, the dog belonged to Hollywood film director Cecil B. DeMille, or so the antique dealer who sold the dog claimed. Cecil was featured in the 2008 exhibit titled “Canis Major: Warhol’s Dogs and Cats” at the Warhol Museum in Pittsburgh, PA. Like the allure of photographs, the art of taxidermy allows one to preserve something in time forever. The photograph, taken on an unknown date, is dramatic and beautiful. Cecil stands in the foreground, and behind, we see the shadow of the dog that once lived, haunting it’s mummified shell. 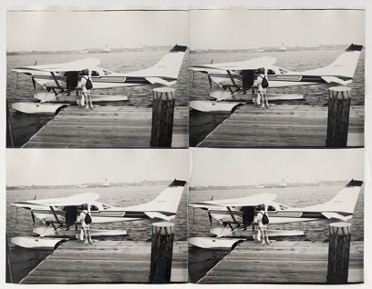 This is a more rare photograph from Warhol’s oeuvre. It’s a simple picture, explained easily through its title. But the composition is more significant: the grid-formation echoes Warhol’s tradition of riffing on concepts like repetition and (re)production. At first glance, we might expect a group of four photographs to tell a story. But Warhol simply reprinted the same image multiple times. He stitched them together into one expectation-defying final product, presenting an everyday scene with the indifference that often graces the subjects of his work. It’s a moody photograph, taken on a cloudy day and depicting the humble event of a man boarding his seaplane. The image invokes Warhol’s desire to reproduce reality and capture quotidian moments. The photo was shown at the Jack Shainman Gallery in early 2020, in an exhibit called Andy Warhol Photography 1967-1987. 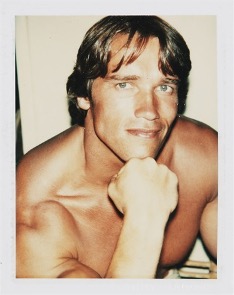 Arnold Shwarzenegger was a big movie star, so of course him and Andy were friends. Andy mentions the future California governor all throughout his diary; the two would frequently hang out together at parties and dinners. This photo was taken in 1977, the same year Schwarzenegger co-starred in Pumping Iron, a sports docudrama about bodybuilding. A large entry in Andy’s diary comes from Arnold’s and Maria Shriver’s wedding in Massachusetts in 1986.  He recalls: “And Arnold gave a speech and was saying wonderful love things like that he’d make her happy. It was the first time I’ve seen really announceable love, saying everything all out loud”. The two were close acquaintances for years. This photo is another quintessential example of the polaroids Andy would take at the Factory, often as commissions or templates for silk screens and prints. 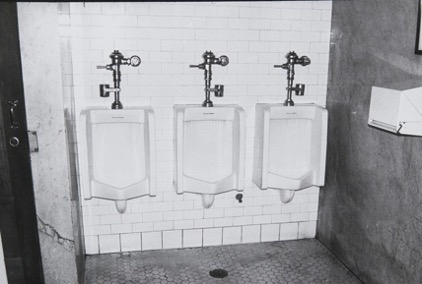 Once again, Andy Warhol’s undying appreciation for the mundane, the factory-produced, and the apparent miracles of modern industry shines through his work. Whether he wanted to contrast his fantastical photos of celebrities against bare photographs of the Boring, or he just loved taking ordinary pictures of ordinary stuff, Warhol seems to have seen things we don’t see. In fact, this isn’t his only photograph of urinals; he’s taken plenty more. In any case, photographs like these emphasize Warhol’s habit of recording everything around him. From fancy parties to public restrooms, from the highs to the lows, he wanted to record it all. He even took pictures of the trash inside trash cans. At the same time, Warhol shows us what is both famous in glamour, and in ubiquity, even if those things are dirty and offensive, which they often are. 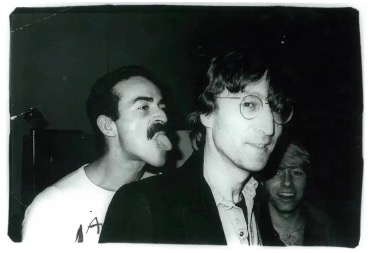 It’s the innocent and quick-handed photographs like these that give us a true glimpse into Warhol’s ever so interesting life. The picture was likely taken at the Factory, where Warhol would gather celebrities and pop-culture icons to create a melting pot of artistic energy and fun. This simple, spur-of-the-moment photograph is now worth $18,000.

Victor Hugo, shown here blowing a raspberry to John Lennon, was a partner of fashion designer Halston Frowick, and a good friend of Andy Warhol’s. At first, they met when Andy noticed a window dressing he created for Halston’s Madison Avenue store. He would later become one of Andy’s assistants at the Factory and model for some of his polaroid series. The subject of the photo is John Lennon, giving a flattering side-glance to Warhol’s camera. Warhol was good friends with Lennon, and the two were big artistic inspirations for one another. Andy took many polaroid portraits of the Beatles singer as well. One was used as a template for a silk screen that would become the cover art for Lennon’s second posthumous album, released in 1986.

In the right corner is Rupert Smith, who became Warhol’s master printmaker in 1977, and who would collaborate with Warhol often. Smith was extremely important to the success of the Factory; without him, Warhol’s studio would have struggled to produce at the level of commercial output it achieved. Warhol was so pleased with Smith’s printmaking, that he even let him include his print stamp next to Warhol’s signature on all of their works together. 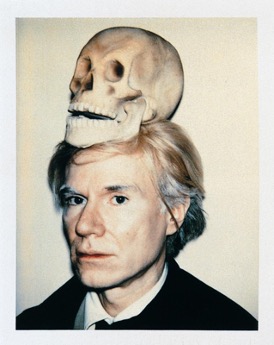 Andy Warhol was just as fascinated with mortality as he was with fame. We can see it in his Death and Disaster series, his Skulls portfolio from 1976, his accelerated interest in Marilyn Monroe after her suicide, and this 1977 self-portrait. (Not to mention, when an attempt on his life was made in 1968, suffering a gunshot wound from Valerie Solanas). A skull is the classic memento mori, appearing here on top of his head, perhaps in recognition of his own eventual end.

Furthermore, Andy’s multitude of self-portraits, considered alongside his obsession with depicting other famous stars, could be seen as his very own acceptance and presentation of himself as a celebrity. In his other auto-photography, he poses in various gestural forms and costumes. Posing like a celebrity, he divulges a self-consciousness of his character’s place in the mythos of the art world. With his self-portraits, we see a rare exposition of Andy masquerading as the subjects he captured. Effectively, and finally, Warhol canonizes his own personae within the massive archive of pop-culture he created.