Chat with us, powered by LiveChat Warhol and Halston: Artists and Friends who were Better Together Skip to content

Warhol and Halston: Artists and Friends who were Better Together

Home ▸ News ▸ Warhol and Halston: Artists and Friends who were Better Together 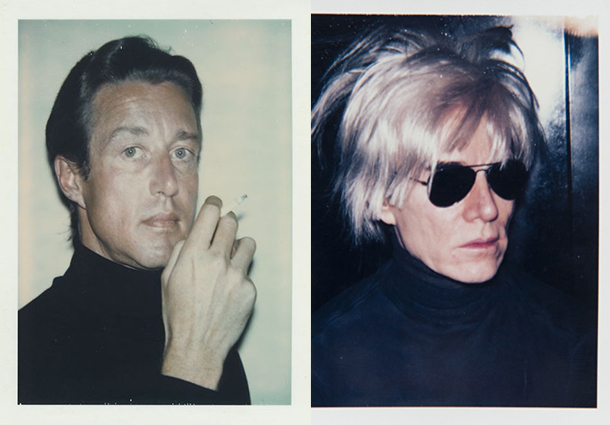 In most pictures of legendary pop artist Andy Warhol, you see a soft-spoken man with a serious face, sometimes awarding cameras a small smile. He would have wisps of white hair falling from his wig across his forehead, while the rest of his hair followed its own rules and sat messy around his head. Oversized clear glasses often framed his bulbous nose and deep set eyes, hinting that this somewhat disheveled personality was actually a chic free-spirit. Frequently dressed in a black turtleneck, he exuded an elegant minimalism.

Heavily bronzed with big downturned blue eyes, Warhol’s closest friend and fashionista, Roy Fenwick Halston (who went only by Halston), looked at ease in front of a camera, handsomely confident and charismatic. There was often a cigarette dangling from his hand; many would say he was never without the comforting drug nestled between his fingers. His light brown hair was coiffed in a simple style away from his face, and like Warhol, his trademark black turtleneck exuded an elegant minimalism.

The two friends were incredibly different but shared a desire, justifiably a need, to transform the rigidity of art and fashion. This bond forged an iconic working friendship that influenced the intersection of  art and fashion that we recognize today. Whether it’s in the form of a 2014 exhibit like Halston and Warhol: Silver and Suede or a Netflix feature series like “Halston”, America posthumously commemorates the work, friendship, and lives of Warhol and Halston.

Both artists had a lust for life that clothing or art could not fully encompass. Part of the reason they became social icons and celebrities is because celebrities wanted to be around them, be seen with them, wear them, and be painted by them. Their identities became as fabulous as their work, and collaboration seemed imminent.

Andy Warhol was born Andy Warhola in Pittsburgh, PA in 1928. He was the son of Slovakian immigrants, growing up within the small community. In his youth he suffered from St. Vitus’ Dance, but in the months fighting his illness he learned how to draw from his mother. He later pursued art in college, dropped the final “A” from his last name, and wrought his talents in New York City as a commercial graphic designer for fashion magazines.

Throughout his life, Warhol was fascinated by consumerism, industrialization, and the feasibility of repetition and the ordinary. Warhol wanted to work like a machine, or rather be the machine, and people began to take notice of his blunt, effortless way of doing art and it’s candid pop culture themes. Warhol had a seemingly naive perception of an idealistic world and created this vision through the processual, mechanized screen printing of popular subject matter.

As he once said, “The things I want to show are mechanical. Machines have less problems. I’d like to be a machine.” Warhol felt that art could be an effortless task manufactured to perfection, and his intrepid rational, which diverged from individuality, is the reason he was an individual and his work became high art.

Halston was fashion’s equivalent to Warhol. He created high fashion looks from casual and comfortable clothing, fashioning the suede shirtdress of 1973 which encapsulates the essence of his style. He had a way of  adding whimsicality and elegance to simple commercial designs. Whether it was Liza Minelli wearing a Halston, Bianca Jagger wearing Halston on horseback to a Studio 54 birthday bash, or a runway event, he impressed the nation with his promotion of minimalism, glamour and comfort.

Halston was born in Des Moines, Iowa in 1932. His love for fashion began during his childhood, where he would design attire from the animal furs and feathers from his family farm for his siblings. Following in the footsteps of some of fashion’s greatest (e.g. Coco Chanel), he became a career milliner. Halston designed hats in Chicago before taking his skills to luxury department store, Bergdorf Goodman, in New York City.

Both artists followed a slightly offbeat “small town, big dreams” narrative. Halston and Warhol both grew up as gay men in conservative towns before making it to the freedom of New York City. They also worked commercial jobs like window dressing, changed their names, and became sophisticates who innovated the arts and high society through technology, material, and modern sexual confidence.

Halston’s fame came in the form of a dented hat worn by fashionista and first lady Jackie Kennedy. At John F. Kennedy’s inauguration, Jackie Kennedy wore a dented pink pillbox hat by Halston that shocked the world with it’s simple and refined style. The characteristic dent was actually an accident, made after Ms. Kennedy stopped it from blowing away in a big wind. This simple, form-fitted style became a zeitgeist of early 1960’s women’s fashion and the hat itself remains a relic. Halston even jokes that people who later bought replica pillbox hats “copied it and put a dent in it.”

Warhol’s fame came in the form of Marilyn Monroe prints and Campbell’s soup cans screen printed 32 times. Their bold and mass produced style transformed advertising into an art by depicting a mundane consumer object, ultimately confusing the world enough to make it a masterpiece. His Campbell’s Soup Cans allowed Warhol to become like the celebrities he looked up to.

Halston appreciated Warhol’s art and commissioned portraits from the pop artist. In turn Warhol would wear Halston’s blooming fashion line. By the late 1960’s, wealthy socialites and celebrities were also eating up Halston’s offerings, which were deceptively simple yet extraordinarily modern against the stiff french style and hippy flower power outfits of the decade. 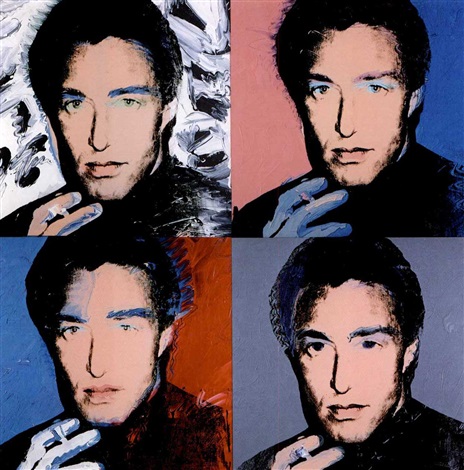 In a diary entry in 1976, Warhol wrote that Halston’s clothes eventually became so expensive and desirable, that one time he, “went over to Halston’s store, [when] it was really un-busy but then everything is so expensive that if they just sell one little hanky they can have dinner.”

It’s surprising that the two never collaborated until the 1970’s, seeing as they fell in the same social circles. However when they did, magic happened. Halston initiated their professional relationship when he asked Warhol to be in charge of his runway presentation at the Coty American Fashion Critics’ Awards in 1972. The show was unlike any other. With Warhol’s artistic eye and Halston’s freeing collection, the models created an immersive experience by animating life into the clothing, whether through acting out scenes or accenting the outfits with wild props. It made for a memorable show, and stressed the idea of fashion as an artform. Since that first show, their mutual inspiration of one anothers’ designs were adopted into their own works. For Warhol, this meant adding Halston fashion to Exposures, and for Halston, it meant taking Warhol’s subject matter and putting it on clothing.

Warhol and Halston: Studio 54 and the End of an Era

Warhol and Halston appreciated the power of identity and celebrities in American culture. It’s why they were dubbed the Prince of Pop Art and “first celebrity fashion designer.” Still, they understood that fame is more than being good at a trade. Being a celebrity solidified them as modern trendsetters in other aspects of culture. Their status meant their choices were socially acceptable and adopted by others, and their identities as gay men inspired a social shift towards inclusivity of other sexualities, genders, and lifestyles. Warhol’s Ladies and Gentlemen portfolio and Halston’s glam androgynous-leaning disco attire further reflected this cultural shift.

One cannot fully understand the relationship between Warhol and Halston without mention of Studio 54, which opened its doors in 1977. Most remaining pictures of their social lives are shown attending opulent parties at the infamous disco dive club, featuring pop culture icons like Liza Minelli, Bianca Jagger, and Grace Jones. Whether they’re seen hugging other creatives, or in dizzying ecstasy on the dancefloor, Studio 54 was as much a part of their wild identities as their art was. Halston’s minimal designs were a huge phenomenon in disco clubs and scenes like Studio 54. 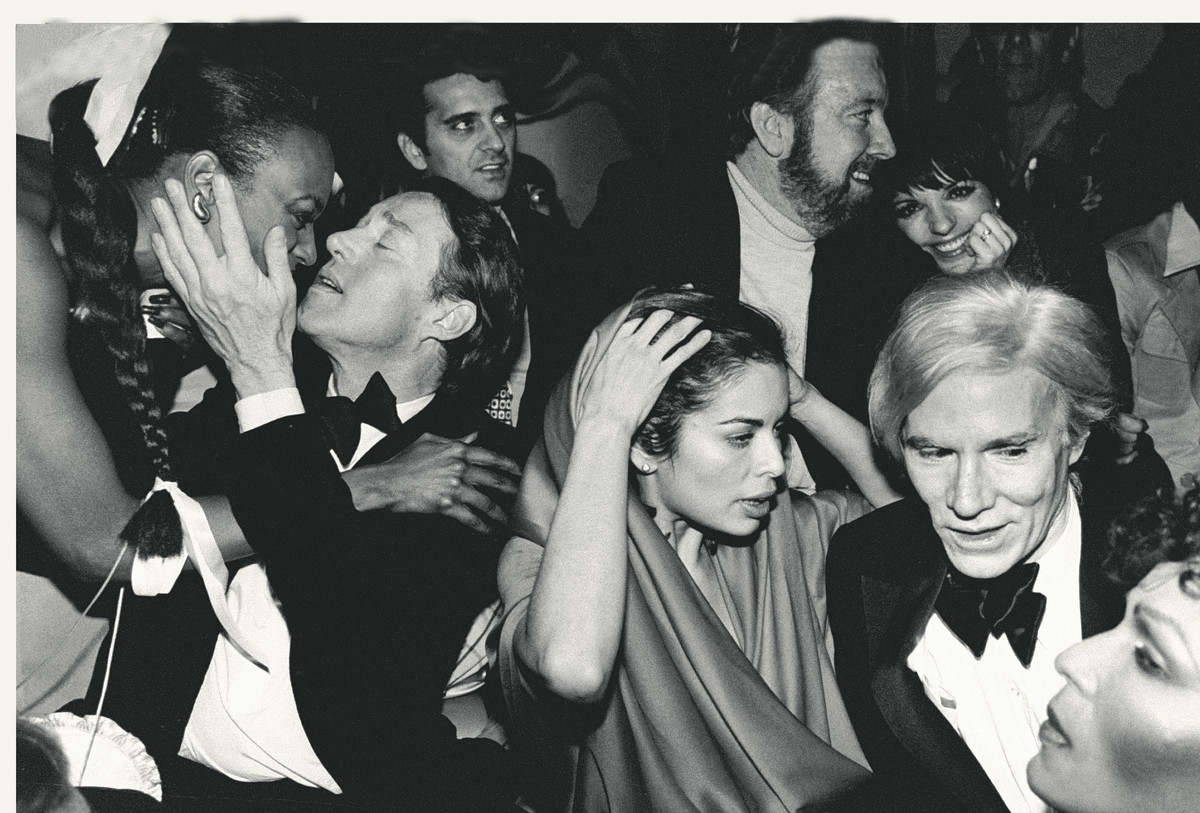 The club was only around for about three years before it shut down, but it’s sensual aesthetic and attraction of the celebrity “in-crowd” aligned perfectly with Warhol and Halston’s social and artistic aims. Co-owner Ian Schrager told The Guardian that, “When you have a club, it’s supposed to be cool, subversive to the status quo, a little arrogant, underground, we thought that was a way to present it. It’s a bit subversive and risque, but that’s what a nightclub is about.”

The close friends were well known to give each other quirky gifts too. One of the most memorable gifts was cheesy Muppets paraphernalia from Halston, which Warhol later put in a time capsule. Gifts also came in the form of elaborate parties for each other’s birthday at Studio 54. 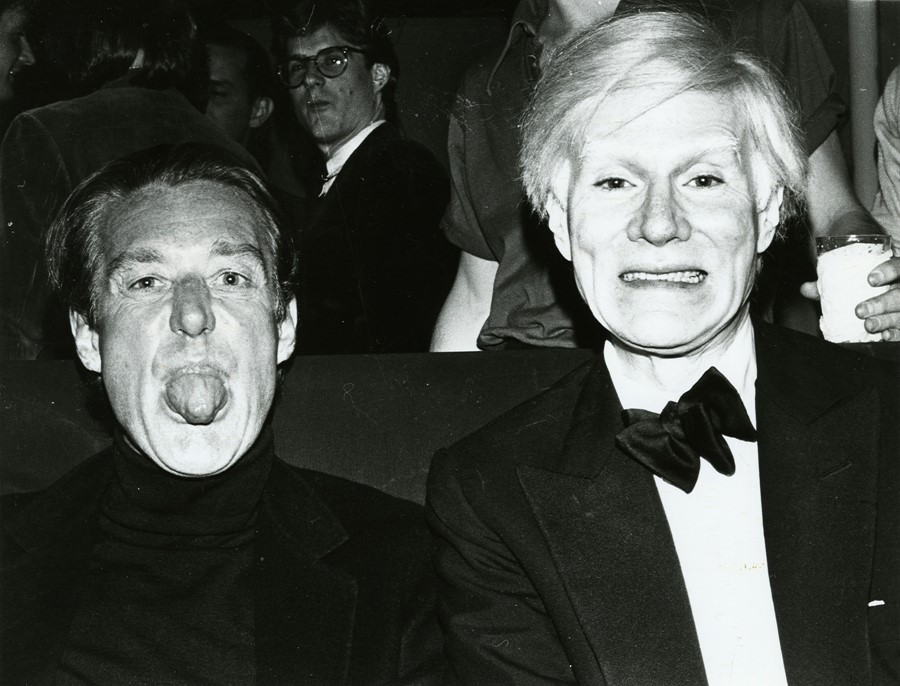 Like many artists, Halston’s fame disappeared in a stroke of bad luck. In 1980, Halston lost his credibility in a failed collaboration with J.C. Penny for affordable clothing, which resulted in Bergdorf Goodman dropping his high end line and celebrities no longer wearing him, or caring about him, except for Warhol. Warhol remained a friend and collaborator of Halston until Warhol’s death in 1987.

Warhol was inspired by Halston, and Halston by Warhol. Their iconic friendship was a product of shared boldness and stylishly taboo identities and lifestyle. Together, they broke boundaries in art, fashion, and common culture, unknowing of how revolutionary their legacies would become.