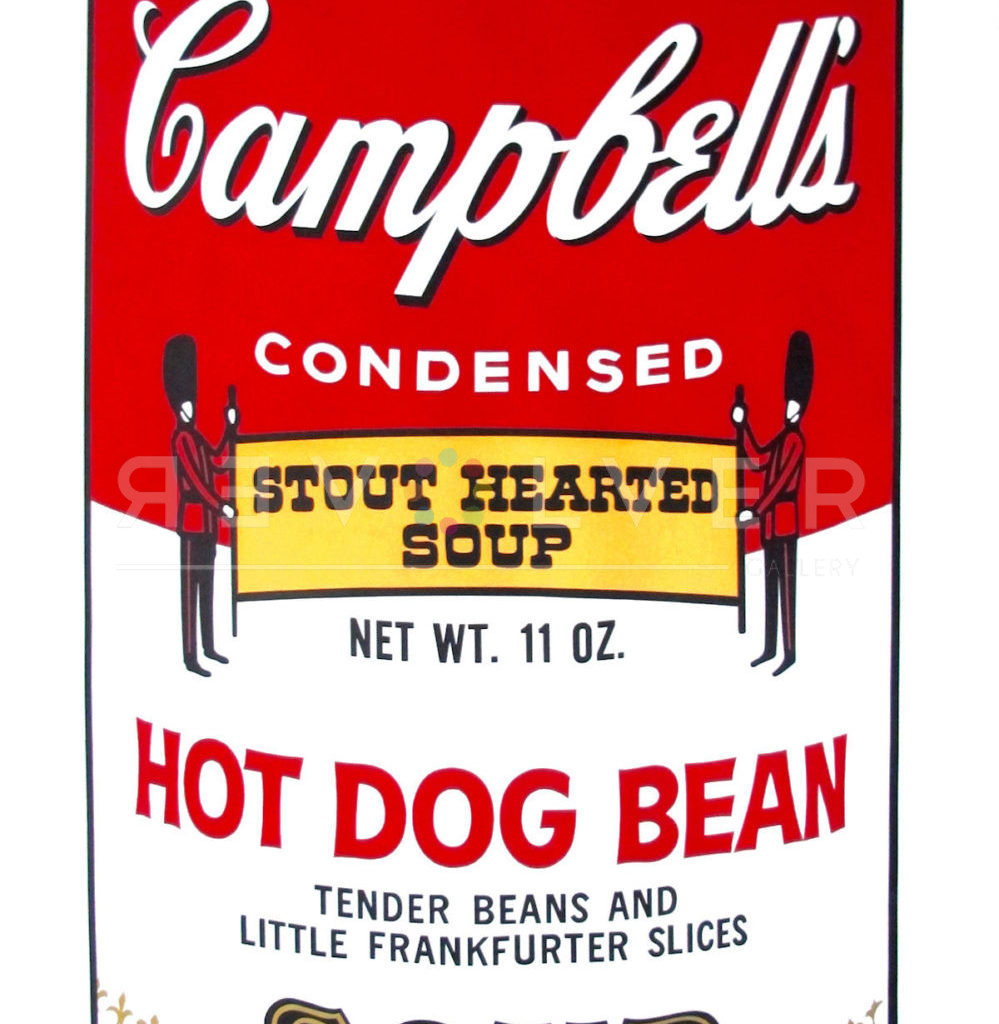 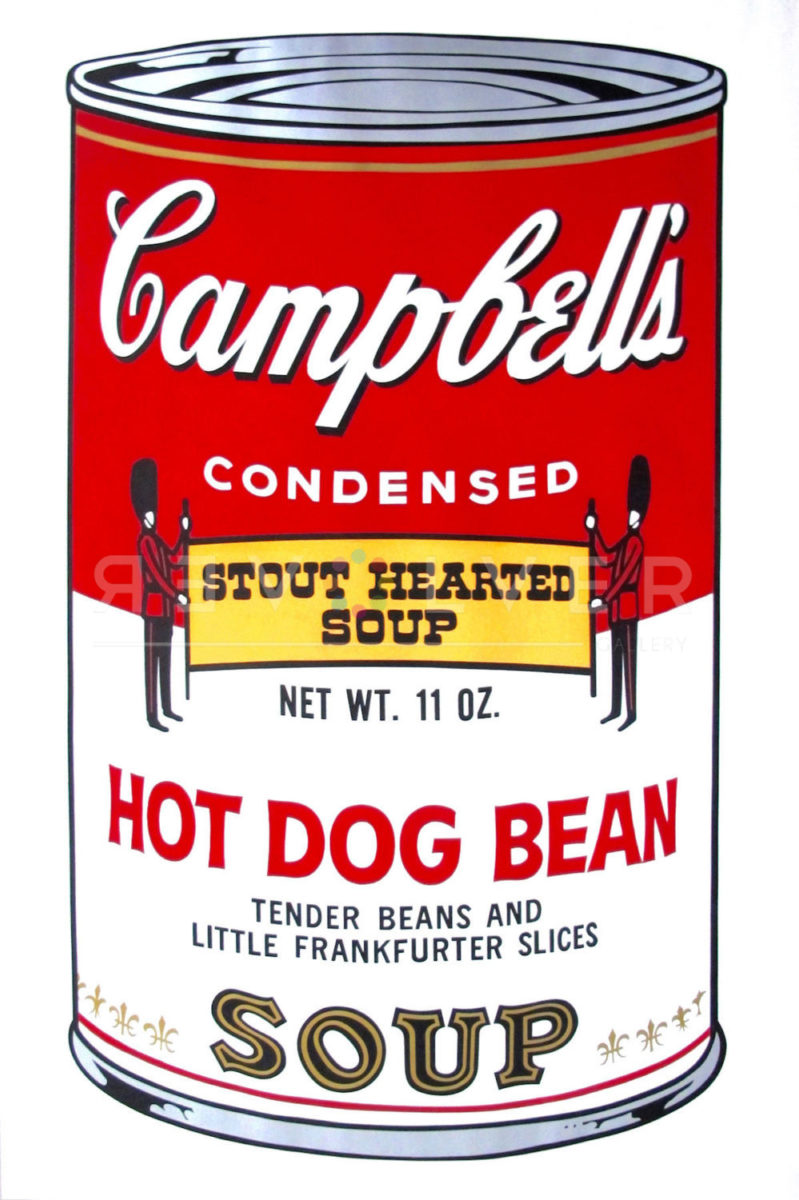 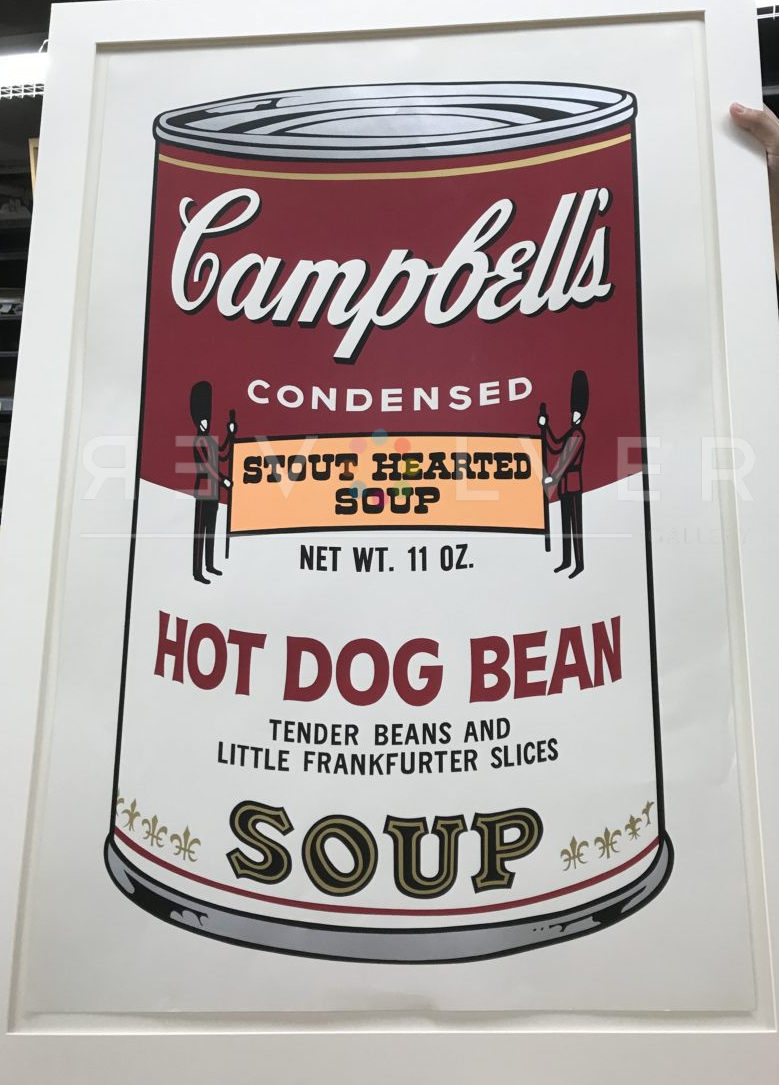 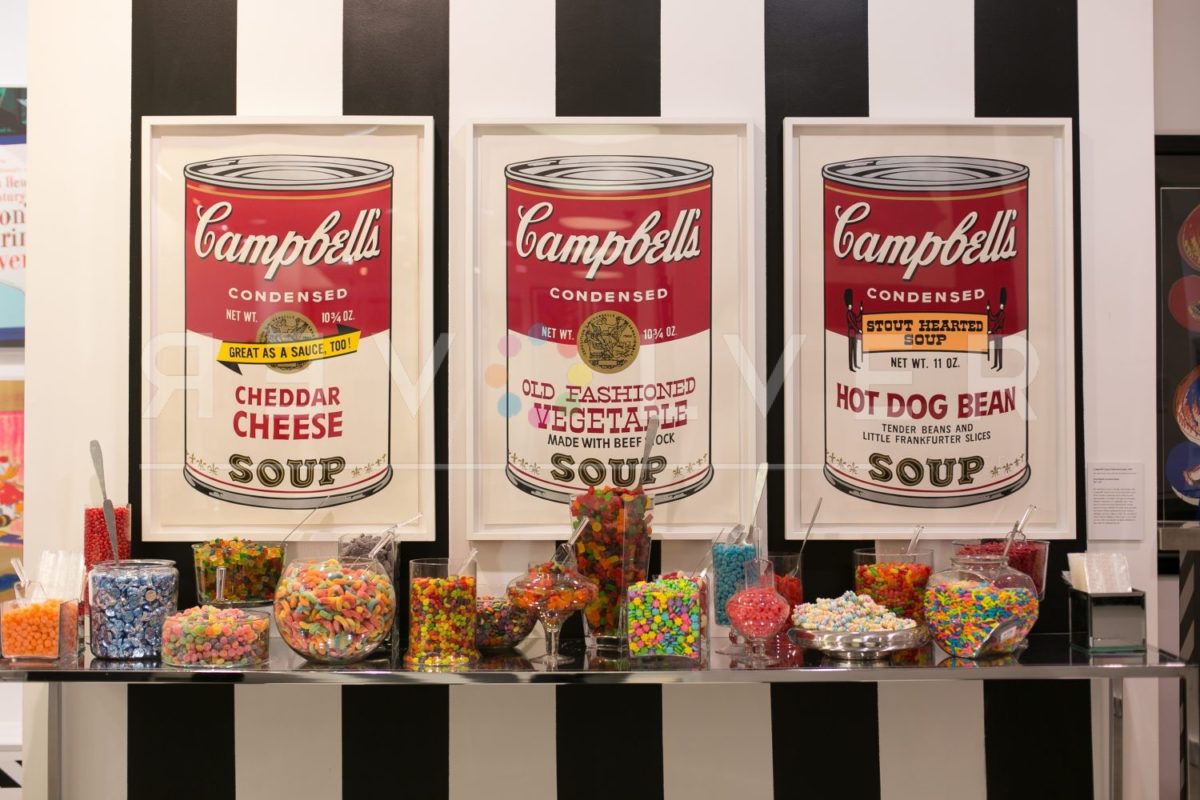 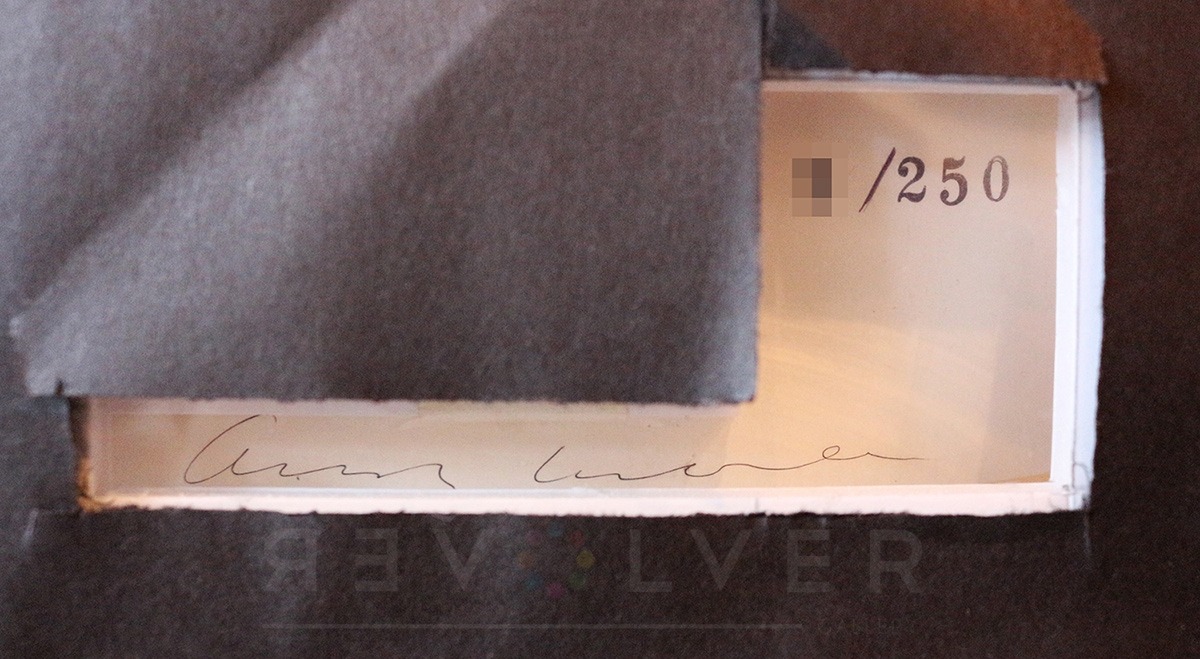 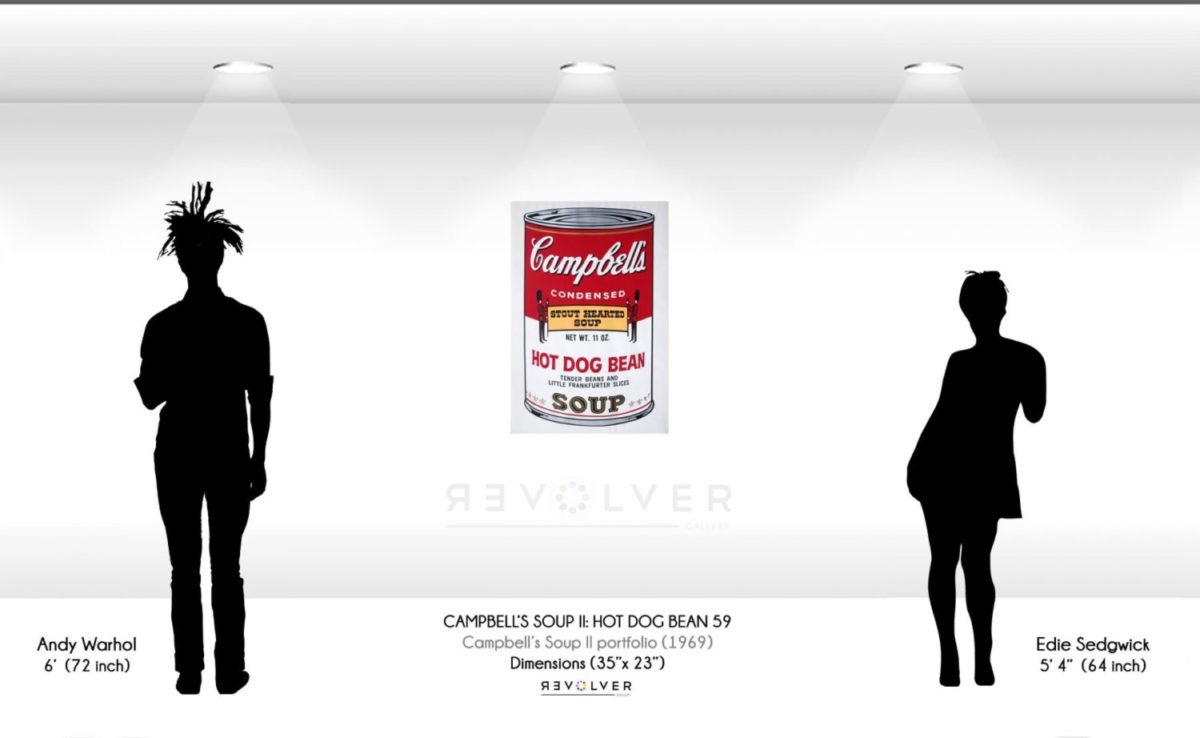 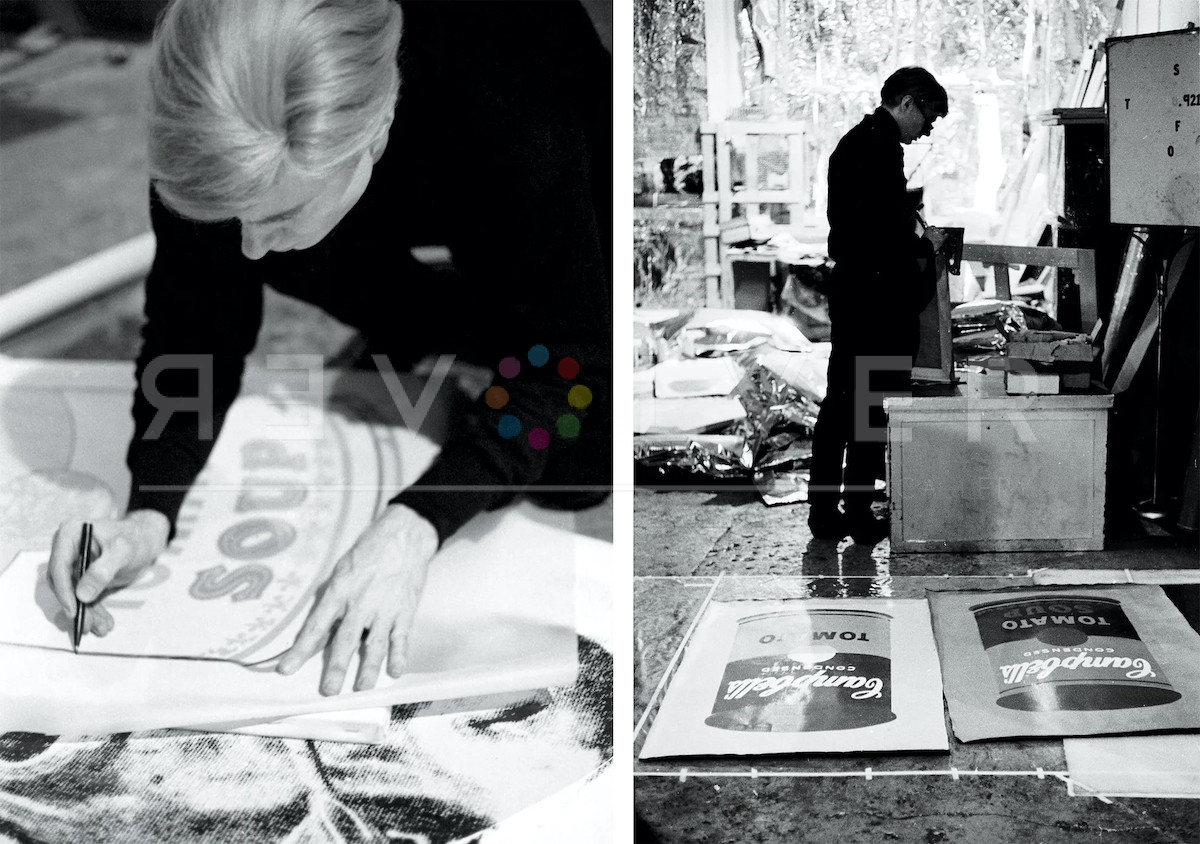 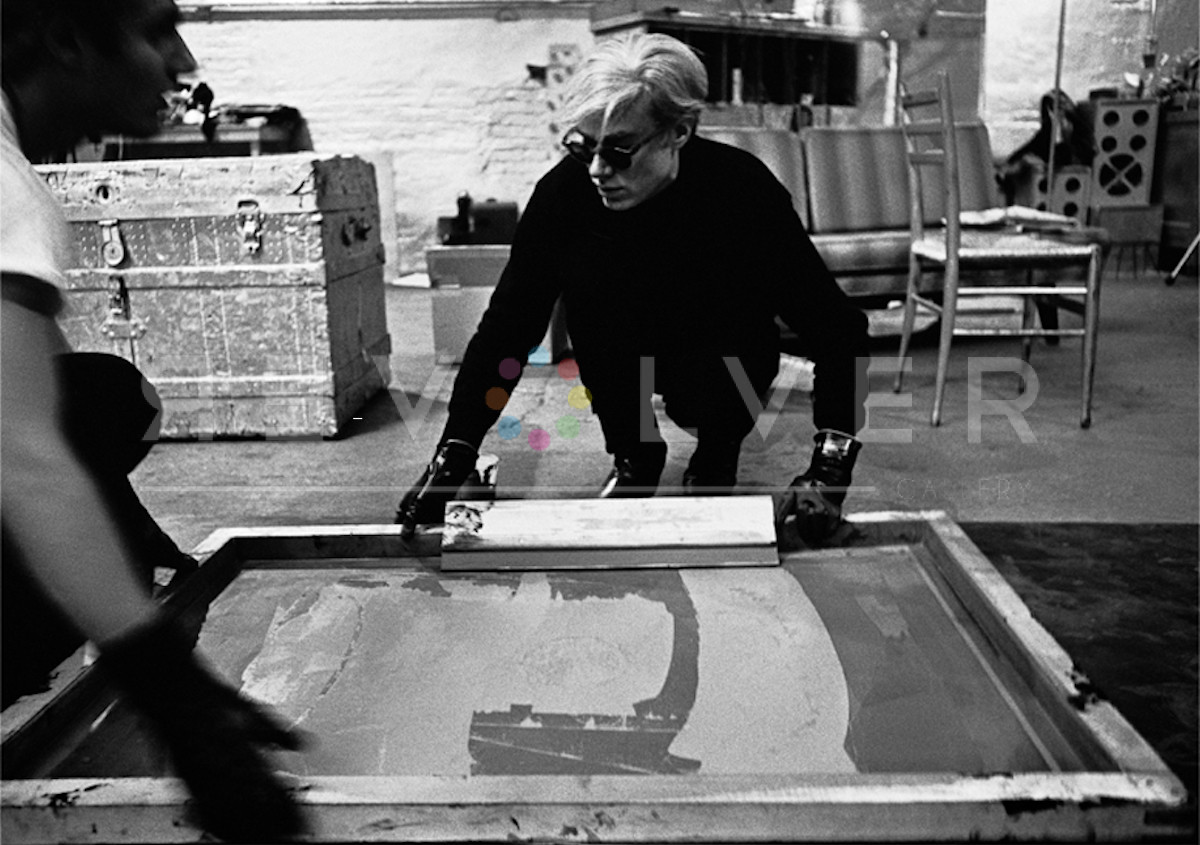 The Campbell’s Soup Can is one of the most iconic pop art images of the century, serving as a symbol of consumerism and advertising. As a Pop Artist, Warhol appropriated well known objects of consumer culture, transforming them into high art. Warhol took the simple design and blew it up to a 35×32 inch print, with its flat and bold composition. Ultimately, works like Campbell’s Soup Cans II: Hot Dog Bean 59 challenged what could be deemed socially and artistically acceptable, forever changing the trajectory of modern art.

This new collection of prints has the same trademark design Americans know and love, but with the bonus of new graphics. In place of the traditional Campbell’s golden seal, Warhol created unique illustrations for each label. Campbell’s Soup Cans II: Hot Dog Bean 59 shows a banner which reads “Stout Hearted Soup,” held up by two Queen’s Guard soldiers. The front of the soup can also reads, “Hot Dog Bean – Tender Beans and Little Frankfurter Slices”. This new design compliments the previous traditional soup cans, but stays true to the repetitive appearance which Warhol appreciated. Other works from this series include New England Clam Chowder 57, Tomato-Beef Noodle O’s 61, Chicken N’ Dumplings 58 and Vegetarian Vegetable 56.

Originally, Warhol hand painted the cans for his 32 Campbell’s Soup Cans portfolio. This all changed after he honed the screen printing technique, which Warhol used for its reliable and precise results. This new creative development became Warhol’s signature method of artistic creation, which he used to mass produce detailed images in a more accessible way. By using this new technique, Warhol harnessed his true potential and created the repetitive images that made him famous.

Warhol’s love for mass-production, advertisement, and Campbell’s soup cans all morphed together to create these series. Although the soup cans are arguably his most notable works, the artist received some backlash after showcasing his original series (of paintings). Due to the overwhelmingly familiar nature of Warhol’s Campbell’s soup cans, people questioned the significance of his work. Indeed, the commercial subject matter offended many artists and critics. Decades after their original debut, people may still debate the artistic value of Warhol’s soups. Nonetheless, these prints became some of the most beloved images of modern art.

Despite some of the initial criticism Warhol received, the soups catapulted his success. The Campbell’s Soup Cans soon became a quintessential item of Pop Art history. Warhol created his original design for these soup cans at the dawn of the new art movement, helping to launch the genre to the realm of mainstream art. Still to this day, Works like Campbell’s Soup Cans II: Hot Dog Bean 59 rule the world of Pop Art and remain the subject of artistic and academic discourse.