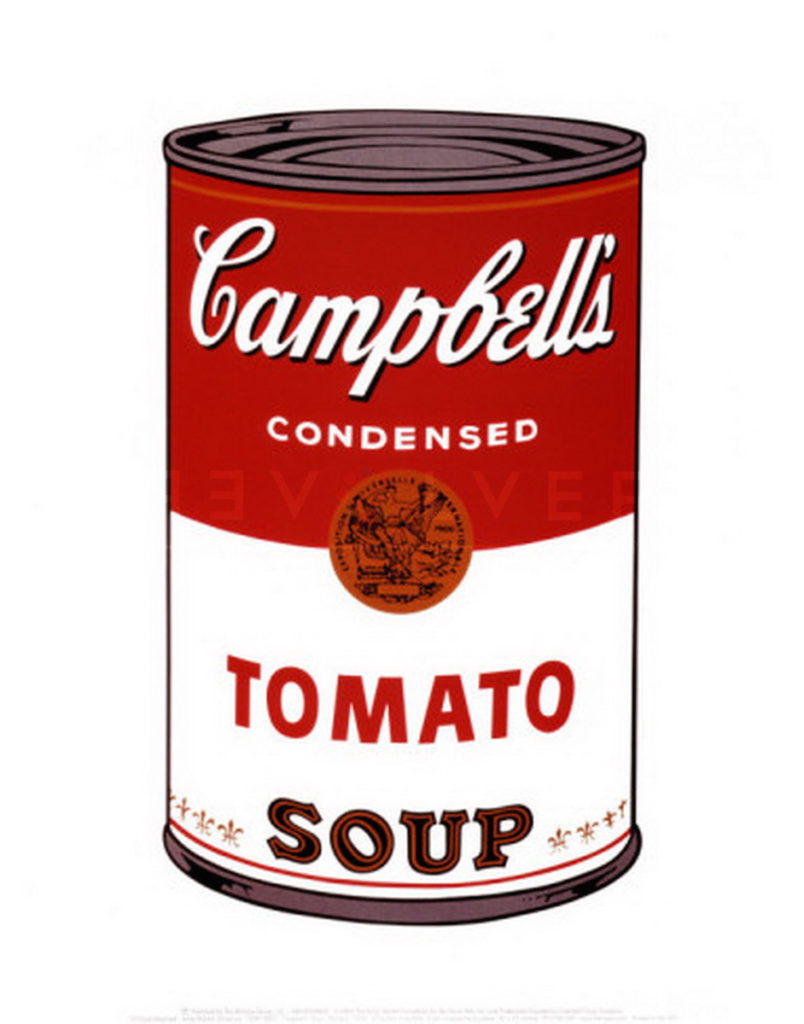 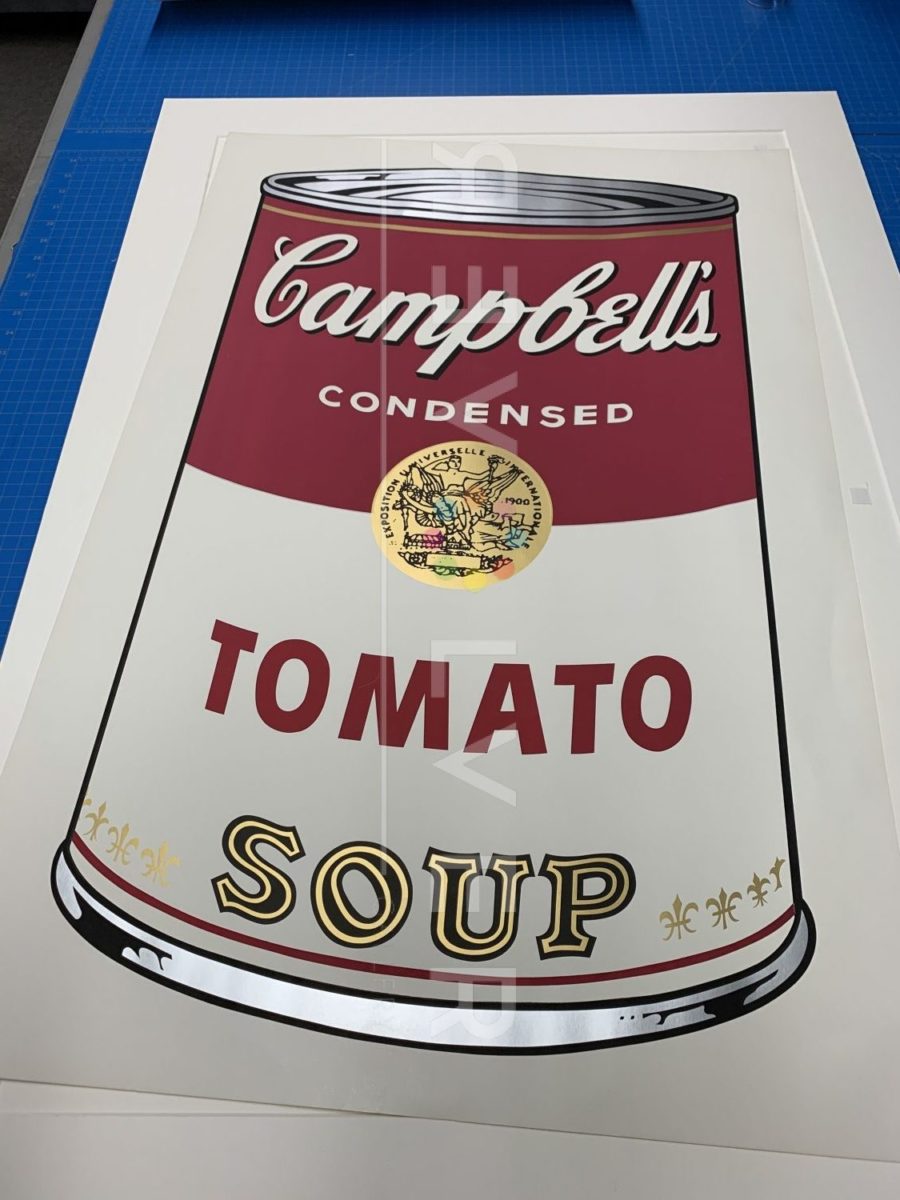 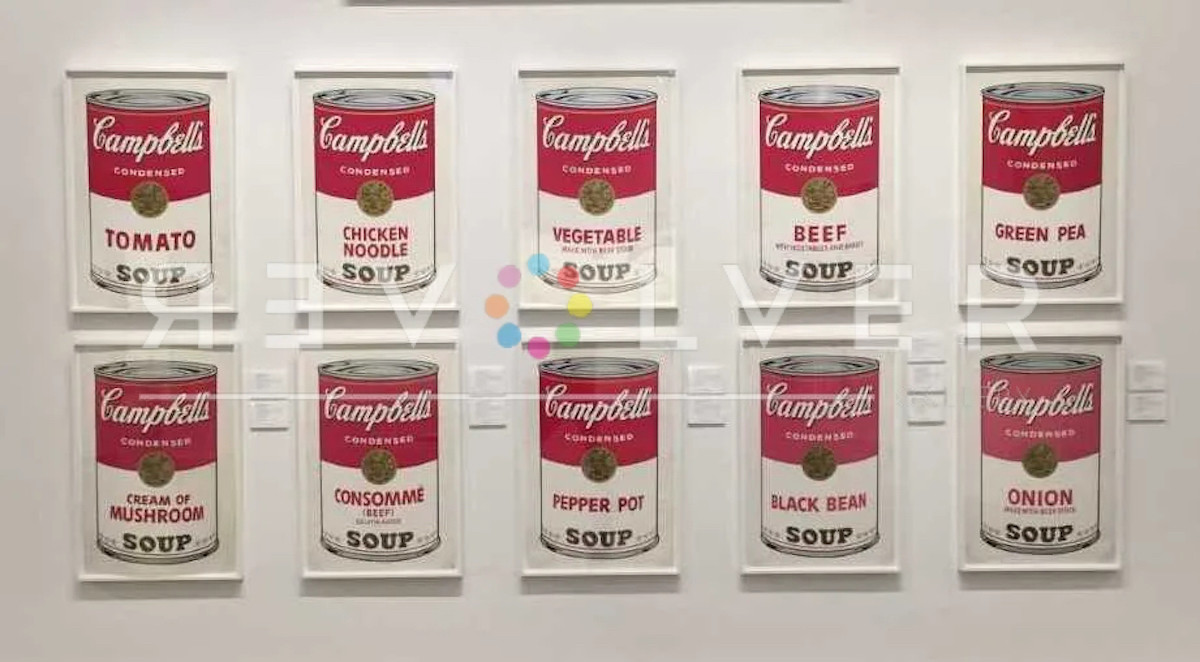 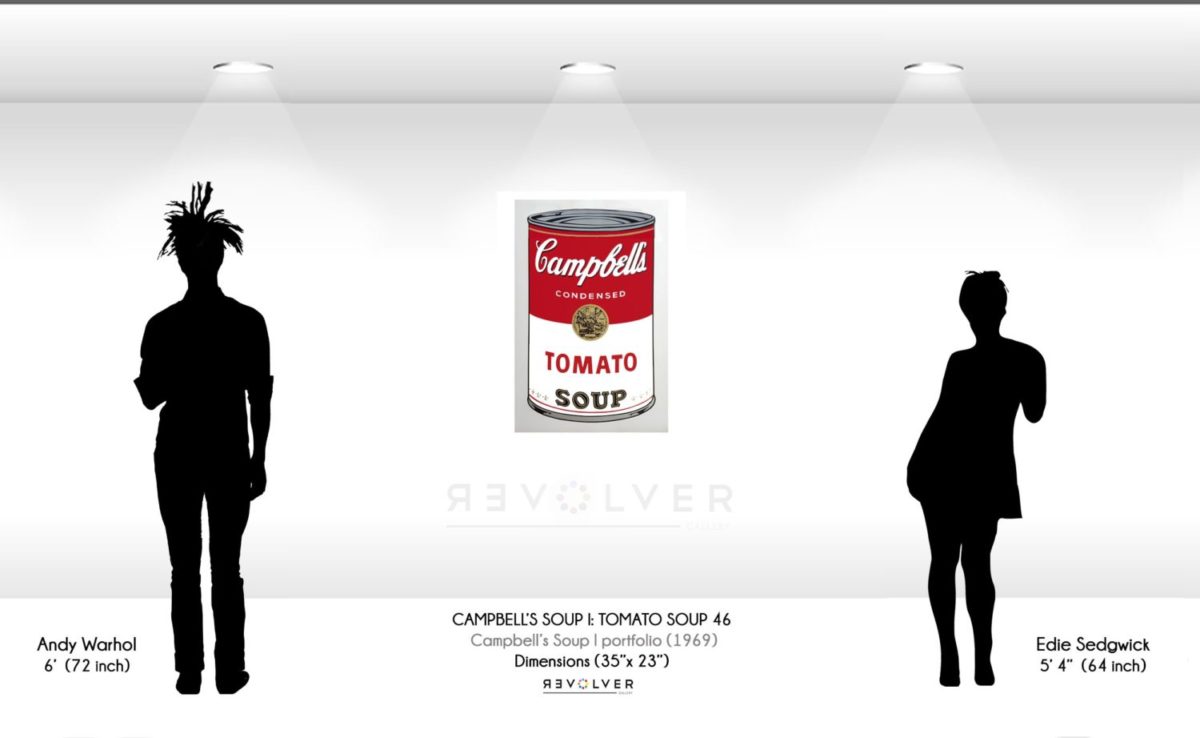 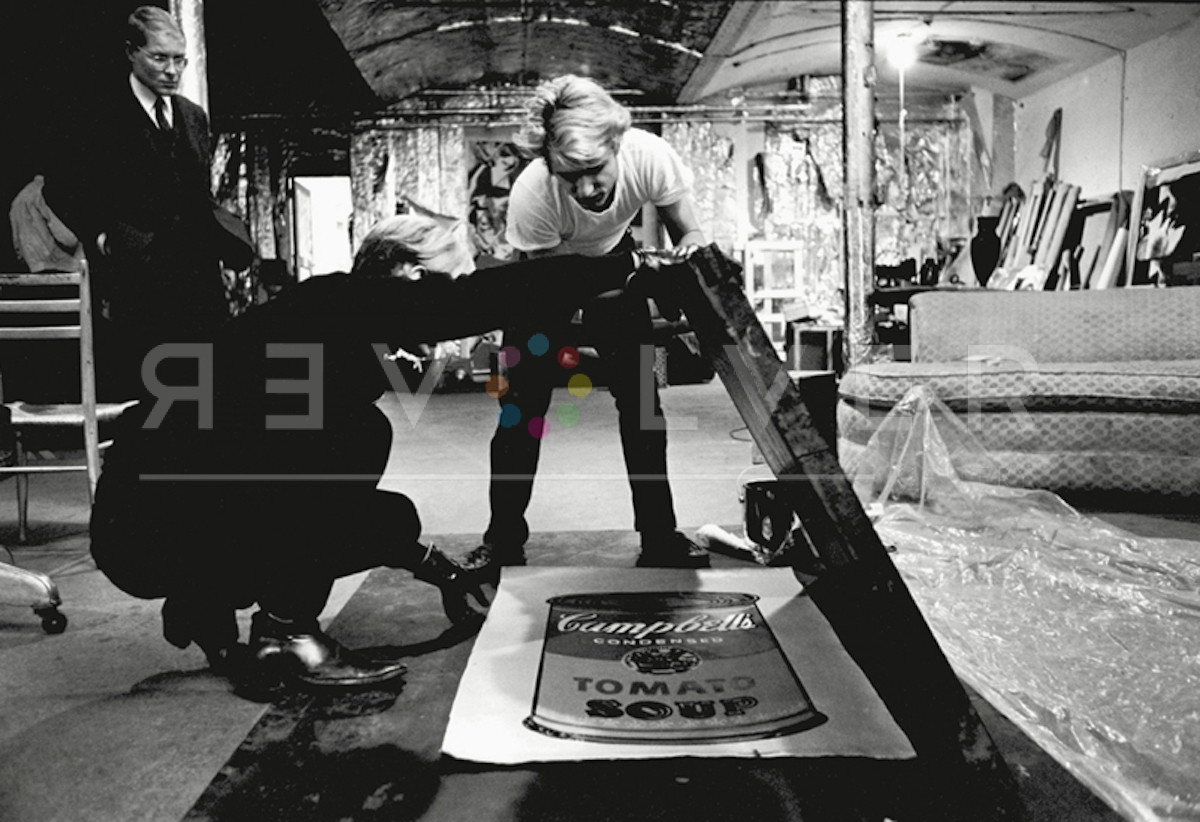 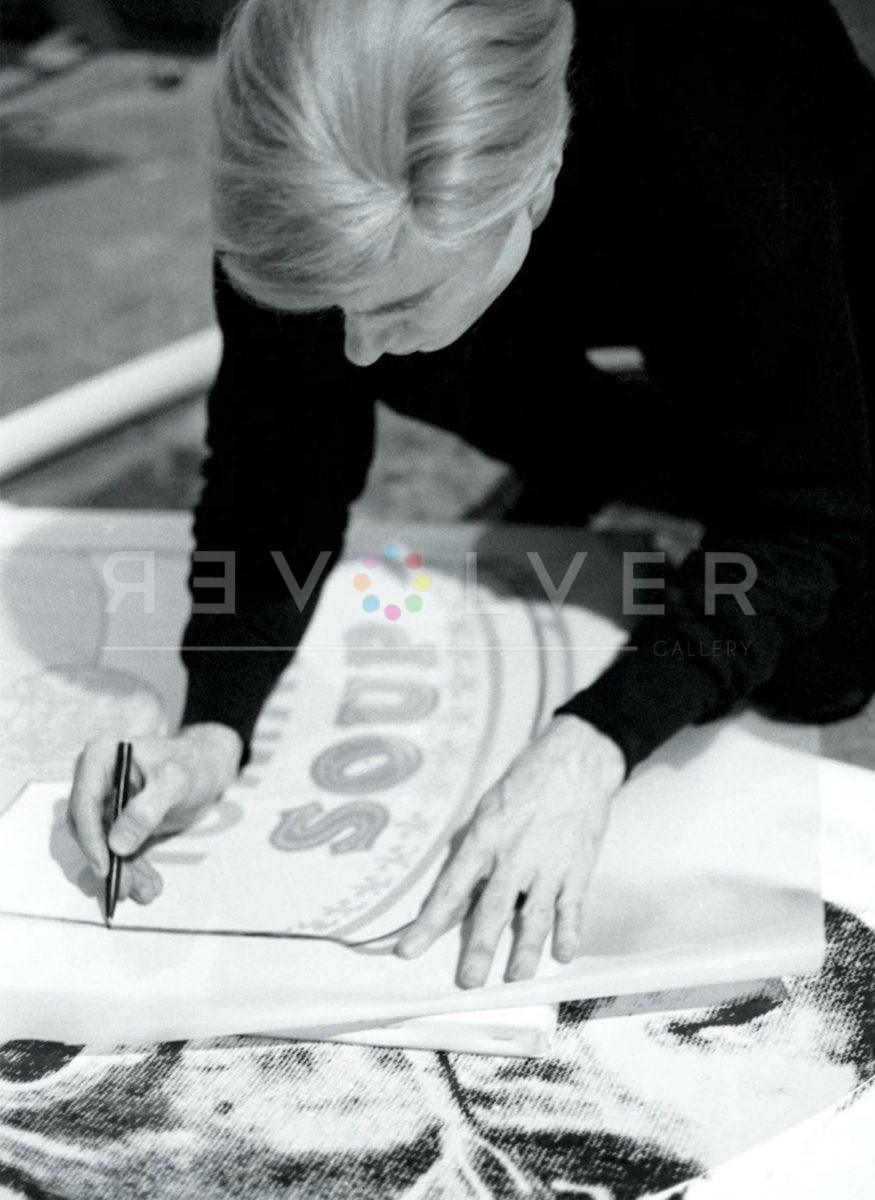 Campbell’s Soup Cans I: Tomato 46 by Andy Warhol is a print from his 1968 Campbell’s Soup Cans I portfolio. The famous series exhibits Warhol’s ability to break the mold of his time and champion the Pop Art movement. After painting 32 Campbell’s Soup Cans in 1962, Warhol returned to the soup can concept to screen print the images. Using this technique, he was able to achieve an even closer replication to the actual Campbell’s product. The design is simple and bold, and uses a small range of colors to create a pleasant contrast. Out of all the different soup flavors Warhol created, the tomato flavor is perhaps the most famous. This portfolio, as well as Campbell’s Soup Cans II (1969), contain some of Warhol’s most valuable screen prints.

Warhol became famous for transforming everyday objects and images into high art. The Campbell’s Soup Cans are some of his earliest examples of this tradition, and were vital to the emergence of the Pop Art movement. When Warhol debuted his original Campbell’s paintings, 32 Campbell’s Soup Cans, in 1962, they were dramatically different from contemporary trends. Abstract expressionism was the dominant art style of the time, and Warhol’s strict commercial subject matter shocked artists and critics. For some, the work was simply a conspicuous appropriation of a popular commodity. Many people struggled to understand its meaning, or to concede that the work possessed legitimate artistic merit. Even though the exhibit was controversial, many people enjoyed the artwork. Ultimately, the soups became a huge success, and are now some of the most important works of modern art.

When viewing works like Campbell’s Soup Cans I: Tomato 46, it becomes evident why Warhol’s works were so difficult for some audiences to digest. Popular artwork of the time focused on abstract composition, and the artist’s ability to convey emotion through the canvas. Clearly, Warhol’s soup cans are not meant to be admired as a feat of technical skill, or as a masterful showcase of painterly accomplishment. Instead, Warhol’s Campbell’s Soup cans are rich in a conceptual sense. The significance of the work is linked closely with Warhol’s historical circumstance and the timing of publication. Moreover, they are illustrative of Warhol’s philosophy as an artist.

Unlike the expressionist painters, Warhol found 20th century industrial advancement to be highly inspiring. Whereas mainstream artists worked with concepts like emotion, nature, and human struggle, Warhol found inspiration in common commercial products, which he felt most artists ignored. Specifically, he perceived popular commodities as a more direct reflection of the current human experience. Because of this, he likely understood consumer products and objects of mass-production as untapped sources of artistic energy. Popular commodities fascinated him, and he saw the production of millions of identical objects as a modern miracle. For example, products like Life Savers, Chanel perfume, or a tomato juice box are the exact same no matter where you go. In Warhol’s mind, they are perfect, and even “famous” like celebrities.

In addition to being the most iconic representations of Warhol’s signature style, the Campbell’s Soup cans challenged established norms of artistic value. With the soup cans, Warhol experimented with the context of art, and pushed the limits of what society might accept as art. For instance, if you see a Campbell’s Soup can on a billboard, you probably wouldn’t consider it as art, but as a mundane advertisement. However, by recreating the same image and placing it in a gallery, Warhol urges us to pay closer attention.

Thus, with his early pop art creations like Tomato 46, Warhol encourages us to view certain images differently, and to reconsider our ideas of what “counts” as art. The soups thus attain a provocative quality, especially considering the historical moment from which they originated. Overall, Warhol’s Campbell’s Soup cans redirected common views of artistic merit, and challenged accepted norms of the art world. Campbell’s Soup I: Tomato 46 helped popularize the Pop Art genre and stands as a masterpiece of modern art.